I sat down to fill out my PhD applications recently and–from a university I shall not name–was confronted by a question asking me to elaborate on the challenges I’ve faced in my life due to what might be called my identity politics; those facets of myself that distance me from the hegemonic traits of the common American man. And while it is true that I do not in exactitude fit the socially quadratic definition of: white, male, straight, and middle-class, I found myself fairly miffed at the question.

It is true I am bisexual. It is true I come from a family of low means and education. It is true that I am an anti-theist: I fit an identity politic that, while not as far to the edge of the bell curve as others, is certainly atypical. However, I wasn’t necessarily aware that being queer, poor, and a heathen were qualifications for the degree I sought to enter. Diversity is a crucial component of a pluralistic society, but I thought I was being considered for my merits, not the traits with and into which I was born and over which I had no control.

This is, I think, the general sense in which detractors of identity politics confront the issue–their understanding of themselves and their evaluation of others is predicated on the idea that we hope to be understood as individuals and not as labels. This is very much the tone in which I read Dawkins’s recent Tweet:

The problem with identity being conflated with politics is that it becomes intrinsically impossible to separate the merits of identity from the detraction of those who do not fit it, and fall too easily into categories of sexism, racism, and other kinds of bigotry. A pivotal example concerns the remarks made by Hillary Clinton in a previous Democratic Debate, in which she said one of her improvements over the Obama Presidency would originate from her being the first woman President. It is, apparently, necessary for me to clarify that I am completely in favor of a woman President–the right woman President, that is, much as I would scrutinize a male for the same position. And, should a qualified, courageous, politically adept female come along seeking the office, she would earn my vote for reasons wholly other than her gender or sex. In fact, I’ve gone so far as to say that a person voting for Clinton primarily because she is a female is, in fact, indulging in sexism, as the implication is that a female by virtue of their femaleness can perform the task better than a male with similar or better credentials. It is obvious to all readers, I hope, that that observation is in no way a comment on the need for the restitution of women in American society.

Such instances–like those people voting for Clinton on this basis–show that identity politics can easily subvert what other reasonable considerations might be taken into account in order to claim solidarity with an accepted label.

Such solidarity, however, can rightfully be a point of pride in many cases. As atheist activist Greta Christina posts in response: 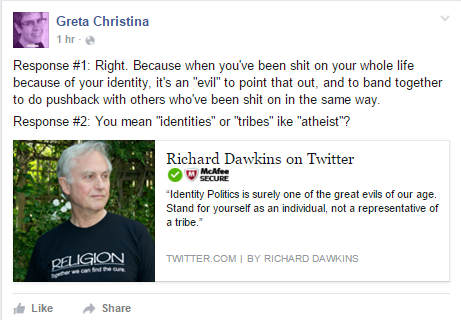 Naturally, I don’t want to speak either for Christina or Dawkins, nor do I think I can be fully saddled with the accusation that I am commenting from a place of complete and total privilege (not that I should care, if I were). My point is simply that Christina brings up what I think is a common and easily remedied misconception about the criticism of identity politics: that such identities cannot be a point of pride or that such solidarity is illegitimately treasured.

As one critic of identity politics, and speaking merely for myself, I wish to say: of course not. My kind of criticism of identity politics (and I believe the kind coming from Dawkins as well, though I am fully open to being corrected on it) comes from pointing out the obvious fact that many of these distinctions are not, ipso facto, qualifications nor detriments. I am brutally aware of the need for groups who have suffered under the hegemonic structure of this and many other countries to rally both like kinds and allies in order to revolutionize the way they are treated. And I think that is a separate discussion than whether or not such identifications make one, say, more worthy of a public office, or perhaps more interesting to a PhD application committee.

There is a way in which identity politics stems from the worst kinds of groupthink–and that those who claim their identity politics to be of benefit think they are operating under a different process of solidarity than partisan voters or, in a more garish fashion, sports mobs. What is important for this conversation is the distinction between what is an action based on identity and what is pride in one’s identity. I am certainly proud of those very few things which make me “different”–those things which, in today’s society, may be considered counterhegemonic, of a minority status, and which require the strength of a group to achieve recognition of rights. I do not, however, think I am better suited for any particular position in life because of those traits–particularly because I didn’t choose to be them.

If we want to be celebrated for our who we are rather than what we are, we must hold those facets of ourselves chalked up to biology with, I think, a little more humility. 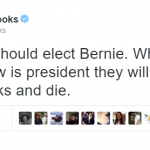 December 20, 2015
5 funniest tweets from the Democratic Debate
Next Post 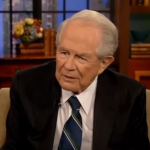 December 20, 2015 Pat Robertson says gays wear special rings to intentionally spread AIDS
Recent Comments
0 | Leave a Comment
"Tom Hughes --- Gee, you're clearly quite intelligent. I bet you're in Mensa. The MAJORITY ..."
markinator Clarification on the now viral Wisconsin ..."
"Source in the Constitution?Again, you have not replied to my argument about any "except for" ..."
Alonzo Donald Trump vowed to destroy the ..."
"Tom, I gave explicit instances when getting ID and registering to vote might be difficult. ..."
Annerdr Clarification on the now viral Wisconsin ..."
"You do realise that the only person we've seen throw the word nazi around is ..."
TheMarsCydonia The Danthropology blog is moving on
Browse Our Archives
get the latest from
Nonreligious
Sign up for our newsletter
POPULAR AT PATHEOS Nonreligious
1