We are all rather used to the idea of Republican’s lying about the issues facing our nation for votes. They tell us that legalized same-sex marriage would ruin the country, they tell us tornados are God’s way of punishing us for abortion. Yet, according to Bill Maher, those days of “zombie lies” are behind us, and the GOP is now just making stuff up as they go.

“In a very short time, Republicans have gone beyond even the ‘zombie lie’ to just making sh*t up,” he said on his HBO show Real Time.

He was speaking specifically about Republican presidential longshot Carly Fiorina who has continued to beat the drum that Planned Parenthood is harvesting organs of aborted fetuses. Specifically, a video she references in which a brain is harvested from a fully formed fetus.

Except the video doesn’t actually exist.

“That video doesn’t exist, unless you subscribe to Nutflix,” Maher exclaimed.

Another story Maher referred to are Trump’s claim that over then thousand Muslims in New Jersey cheered on 9/11.

“He’s like Pinocchio — except when he tells a lie, his balls grow bigger,” Maher said.

The problem is, the Republican base eats up these stories and never bother to check if they even happened. These candidates just make statements and they enjoy a boost in the polls.

January 29, 2016
Ben Carson says Islam is a 'life organizational system,' not a religion
Next Post 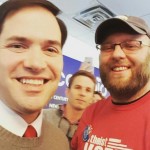 January 30, 2016 Did Marco Rubio steal an atheist's video to pander for donations?
Recent Comments
0 | Leave a Comment
Browse Our Archives
get the latest from
Nonreligious
Sign up for our newsletter
POPULAR AT PATHEOS Nonreligious
1