Should the government ban invocations and religious displays on public land? 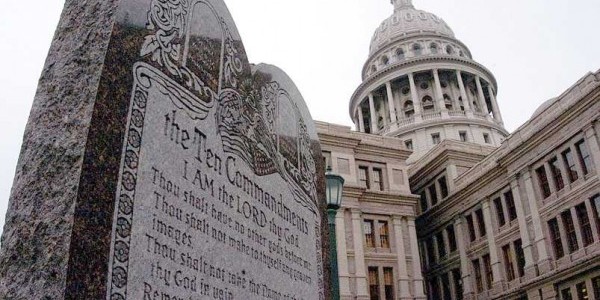 Note: This article is Part One of a two-part series about religious displays on public land and invocations at government meetings. To read Dan Arel’s counter argument as to why they should both be banned, Click Here.

A few days ago, I published an article criticizing Friendly Atheist blogger Hemant Mehta for his softball treatment of atheist troll Chaz Stevens. Mehta responded with an article defending his position, and I feel that discussion should be put to rest.

I do, however, want to answer the question posed at the end of Mehta’s article: “What’s the best way to get local governments to end invocations and put a stop to religious displays on government property?”

I think this question betrays a bias inherent within the atheist movement, which is that the best way to deal with invocations and religious displays on common property – not government property, there is a difference – is to shut down the entire thing. The gist of Mehta’s point about Stevens is that despite his crudeness, he is effective and achieves results, often forcing the government to shut down public forums and, until a better option comes along, at least, he is “winning.” Nobody can argue that Stevens isn’t getting his way, but does Stevens’s way really lead a result we should be desiring?

Back in September, I did a speaking engagement for the Springfield Freethinkers on the topic of atheist activism. During that event, I made the point (which was not well-received) that a person should “be an activist with their atheism, not an activist for their atheism.” My fear with people like Chaz Stevens, actually my fear with movement atheism in general, is that we have become so preoccupied with wanting to express our worldview, that we have lost sight of the fact that other people have a right to express their worldview as well.

I often here from movement atheists that, as Mehta put it, “…we shouldn’t be saying invocations at government meetings at all. Courthouses shouldn’t be sites for religious or non-religious banners.” To that I answer, “why?” Public squares, capitol rotundas, and city council chambers belong to everyone. If anywhere should represent the views of the community, it is in those places. The automatic assumption that our goal should be to shut down these traditional public forums shows, in my opinion, that what many movement atheists want isn’t the separation of church and state, but rather a de facto government endorsement of atheism.

Let’s bear in mind that nearly all invocations and displays are performed or put up by private individuals. Therefore, seeking to close down a public forum – which is Stevens’s goal as well as the goal of many movement atheists – isn’t actually enforcing the separation of church and state, but rather just seeking to make sure that disagreeable views are silenced. Just because you don’t like the invocations and displays are not in and of itself a legitimate reason for shutting down the entire public forum for everyone. My friend and fellow secular activist Brian Conklin made this point beautifully, saying:

“Religion provides a deep sense of meaning for people and that’s good. If a community agrees that they want to include everyone’s religious views as a source of inspiration at the start of a government meeting, then that’s fine. In fact, as long as it includes everyone, it may serve as a sobering reminder that the community is not homogenous and that it’s important to take others into account when creating legislation. Imposing irreligion on a community that wishes to be inclusive of the religious is itself a form of exclusion, and speaks to the hypocrisy of certain movements.”

Now before you rush to the defense of Stevens and other “shut it down” atheists by saying that their viewpoints should also be included, keep in mind that their intention isn’t to be included. Their intention is to shut down the whole thing regardless of how anyone else feels about it. While I certainly think they should be free to protest, I also think that movement atheists should be taking into account more than just their own feelings on the subject. When Mehta wrote “[Stevens’s] approach isn’t the one I’d choose for myself. And I really hope no one else tries to imitate it. But it gets results,” he echoed the feelings of many movement atheists. However, I’d like to offer two counter questions as food for thought: do the ends really justify the means and, if so, isn’t that a tacit endorsement of the means that achieved those ends?

I’ve noticed over the years that many movement atheists are fond of the Hitchens quote from Letters to a Young Contrarian about never being “a spectator of unfairness or stupidity.” Unfortunately, far too few movement atheists have memorized and taken to heart the next line, which is to “suspect your own motives and all excuses.” It’s high time we take a long look in the mirror and ask what a person’s real motives are: do they support plurality and inclusiveness, or do they want to impose their own worldview, come hell or high water?

When it comes to engaging in, being supportive of, or being silent towards uncouth, sophomoric tactics or questionable motivations, we should consider advice even wiser than that of Hitchens. In the movie Jurassic Park, there is a scene where John Hammond is gushing about his dinosaur park and all the wonders in it. Ian Malcolm offers soberly, “you were so preoccupied with whether or not you could, that you never stopped to think if you should.”

Finally, I want to share one final thought on Chaz Stevens and those who support him, either directly or indirectly. It comes, again, from my friend Brian Conklin, who eruditely wrote, “When we allow the loudest and most vulgar to speak for us, we tacitly concede to the opposition their assumptions of our depravity.”

February 22, 2016
Ken Ham says he may ease up on religious requirements for Ark Encounter workers
Next Post 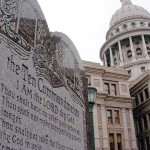 February 22, 2016 Religious displays and invocations have no place in the federal government
Recent Comments
0 | Leave a Comment
Browse Our Archives
Follow Us!