Texas Values, a Texas-based hate group is attacking Disney, along with Apple, Intel, and the NCAA for their threats to pull out any business interests in Georgia should the state’s governor not vetoed it’s Anti-LGBTQ protection bill.

The group said the “corporate bullies” pressured Republican Gov. Nathan Deal into vetoing the bill, and that these companies have openly “declared war” against Christianity.

It’s striking that the day after Easter, churches in Georgia are told their freedoms are not that important to protect. It’s clear that corporate giants like Apple, Disney, NCAA, Intel have finally come out of the closet and declared public war on the religious freedom of clergy and religious schools, as was the protection in Georgia’s very modest HB 757 that they worked to bring down.

The seem to be the most upset with Disney, adding that:

“Will Disney now ban you from wearing a cross outside your shirt at their parks?” the group asked in a statement. “Will a Catholic priest be forced to remove his white collar when he takes a picture with Mickey Mouse?”

Conservative groups and Republicans are up in arms over Deal’s decision to veto the bill, claiming he is throwing away religious freedom and pandering to corporate interests.

However, Deal has stated clearly he believes the law would have made the state unwelcoming to all, and he doesn’t believe that’s what defines his state.

“Georgia is a welcoming state,” he said. “It is full of loving, kind and generous people. And that is what we should want. I intend to do my part to keep it that way.” 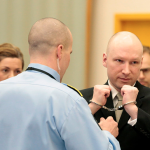 March 31, 2016 Studies on Anders Breivik only focus on his personal failures and ignore societal problems
Recent Comments
0 | Leave a Comment
"Tom Hughes --- Gee, you're clearly quite intelligent. I bet you're in Mensa. The MAJORITY ..."
markinator Clarification on the now viral Wisconsin ..."
"Source in the Constitution?Again, you have not replied to my argument about any "except for" ..."
Alonzo Donald Trump vowed to destroy the ..."
"Tom, I gave explicit instances when getting ID and registering to vote might be difficult. ..."
Annerdr Clarification on the now viral Wisconsin ..."
"You do realise that the only person we've seen throw the word nazi around is ..."
TheMarsCydonia The Danthropology blog is moving on
Browse Our Archives
Follow Us!