‘Genocide & Incest Park’ billboard to be raised near the Ark Encounter

Update: In less than 24-hours the Tri-State Freethinkers passed their first goal of $2,000 to erect their first billboard!

The Tri-State Freethinkers are raising money to erect billboards around Kentucky to counter the Ark Encounter as an immoral theme park that celebrates genocide and highly inappropriate for children.

The park, which is run by creationist Ken Ham’s Answers in Genesis recently won a court battle against the state of Kentucky, allowing the park to discriminate employees while receiving taxpayer dollars. 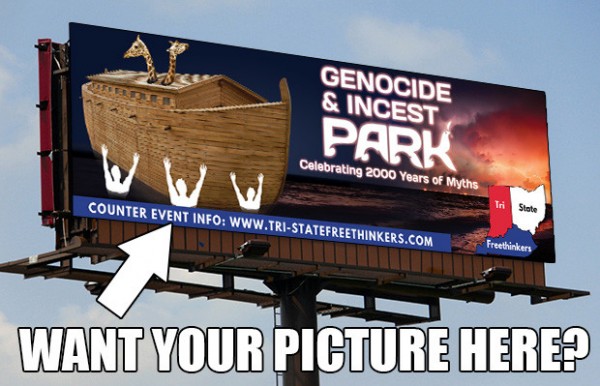 Scheduled to open in Williamstown, Kentucky on July 7, 2016, the park celebrates a biblical parable of genocide and incest. While they have a legal right to celebrate their mythology, we find it immoral and highly inappropriate as family entertainment. Help us remind the surrounding community and potential patrons that the biblical story of Noah’s Ark is immoral and should not be encouraged as a family fun day.

I highly agree with the group and I have, since day one, called the park a genocidal theme park as it celebrates, albeit fictional, the death of millions, if not billions, of people and animals around the world.

The group is also offering a special deal for those who donate $500 or more. You get your picture on one of the billboard depicting you as one of the drowning heathens.

If you want to learn more about the project, or want to donate to make these a reality, click here.

March 16, 2016
Can Jill Stein and Green Party harness the energy of Bernie Sanders supporters?
Next Post 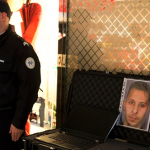 March 18, 2016 Reports: Paris terror suspect Salah Abdeslam arrested in Brussels
Recent Comments
0 | Leave a Comment
"Tom Hughes --- Gee, you're clearly quite intelligent. I bet you're in Mensa. The MAJORITY ..."
markinator Clarification on the now viral Wisconsin ..."
"Source in the Constitution?Again, you have not replied to my argument about any "except for" ..."
Alonzo Donald Trump vowed to destroy the ..."
"Tom, I gave explicit instances when getting ID and registering to vote might be difficult. ..."
Annerdr Clarification on the now viral Wisconsin ..."
"You do realise that the only person we've seen throw the word nazi around is ..."
TheMarsCydonia The Danthropology blog is moving on
Browse Our Archives
get the latest from
Nonreligious
Sign up for our newsletter
POPULAR AT PATHEOS Nonreligious
1