Abandoning religion is the first step to making the world a better place April 25, 2016 Dan Arel

In the last year, I have written about nearly 10 secular bloggers and activists murdered by ISIS and other Islamic extremists.

I have written about a Christian walking into a Planned Parenthood and gunning down those inside who believed he was doing God’s work.

I have written about an orthodox Jewish man who stabbed six people, for the second time, at an Israel gay pride parade.

I have written about a lunatic using nearly $100 million in taxpayer’s dollars and bonds to build a landlocked boat that is meant to celebrate a story of mass genocide.

I have witnessed politician’s call for punishment of women who seek out abortions, I have seen abortion practices smeared and women threatened with violence for acquiring a perfectly legal medical procedure.

I wrote about a boy killed by his church and then pastors who said they could resurrect him.

A 9-year-old boy was shot to death in Iraq for blasphemy.

I have seen transgender men and women told they are sexual predators and are dangerous and should not be able to use the bathroom of their choosing.

I can go on for days.

What does every single one of these acts have in common? From the extremes of murder to ripping off taxpayers to making women feel unsafe?

They are all based on religious dogma and belief.

If we want to begin making the world a better place, we need to start by helping people abandon religion once and for all.

No, I am not talking about proselyting and “preaching” about atheism. I am talking about openly and honestly discussing religious belief with religious people and making them question what faith is, why they believe in what they believe, and answering for the crimes against humanist perpetrated by the religions they adhere to.

This is no less preaching than is discussing why you are a liberal or conservative. It is breaking down the taboo of discussing religion and taking off the kids gloves and pretending we must respect someone beliefs because they hold it dear.

These ideas do not deserve an ounce of respect, and I for one will give them none.

Christopher Hitchens was 100 percent correct when he said, “religion poisons everything.”

The fight for human rights is no fight at all unless it includes the abandonment of religious belief. 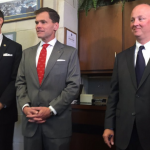 April 26, 2016 Kentucky approves Ark Encounter for up to $18 million in tax incentives
Recent Comments
0 | Leave a Comment
Browse Our Archives
get the latest from
Nonreligious
Sign up for our newsletter
POPULAR AT PATHEOS Nonreligious
1