Ken Ham invited Bill Nye for a private tour of the Ark Encounter May 24, 2016 Dan Arel

Creationist Ken Ham has extended an invitation to Bill Nye to join him for a private tour of the Ark Encounter ahead of the opening date of the park.

“I want to publicly invite Bill Nye to come visit the Ark, I want to show him personally, or just show him where the entrance is, and let him go on his own, whatever he wants to do,” Ham said in a Facebook video posted on Monday.

“I’d be thrilled to be able to show Bill Nye through the Ark, and so I’ll be interested to know if people out there think Bill Nye will take up my invitation. I hope that he does,” he added.

Ham also took the time to try to build a friendship between the two.

“Please don’t be my nemesis, please let’s be friends,” the creationist said.

This was in response to an interview in which Nye said that “I’ll be Ken’s nemesis if that’s what he wants.”

The comment came after Nye said that Ham should not be influencing the mind of children with his creationist myths.

“You can believe whatever you want, but the Earth is not 6,000 years old, and we’re not gonna teach that in science class. Evidence for evolution is overwhelming,” he said. “He [Ham] can run around influencing all the adults that he wants, but the kids would be scientifically illiterate.”

May 23, 2016
Sexual predator Josh Duggar wants his own reality show
Next Post 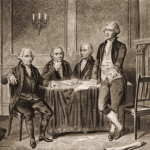 May 24, 2016 Was the United States actually founded on the idea of religious freedom?
Recent Comments
0 | Leave a Comment
"Tom Hughes --- Gee, you're clearly quite intelligent. I bet you're in Mensa. The MAJORITY ..."
markinator Clarification on the now viral Wisconsin ..."
"Source in the Constitution?Again, you have not replied to my argument about any "except for" ..."
Alonzo Donald Trump vowed to destroy the ..."
"Tom, I gave explicit instances when getting ID and registering to vote might be difficult. ..."
Annerdr Clarification on the now viral Wisconsin ..."
"You do realise that the only person we've seen throw the word nazi around is ..."
TheMarsCydonia The Danthropology blog is moving on
Browse Our Archives
get the latest from
Nonreligious
Sign up for our newsletter
POPULAR AT PATHEOS Nonreligious
1