Thursday morning, Oklahoma lawmakers passed a bill making it a felony for doctors in the state to perform abortions. This move basically bans the procedure, a move that is trying to circumvent Roe v. Wade which makes it illegal for states to ban abortions.

“This total ban on abortion is a new low. When abortion is illegal, women and their health, futures, and families suffer,” Amanda Allen, a lawyer at the Center for Reproductive Rights, wrote in a statement Thursday.

GOP Gov. Mary Fallin has five days to sign or veto the bill before it automatically becomes law. If she does sign it, it will likely end up in the courts for a long time, leading to a possible Supreme Court case that could forever change the face of abortion in the country.

The bill itself is unconstitutional and the attempt to dodge the SCOTUS decision of Roe v. Wade is obvious.

Republicans have no bottom, they will stoop as low as they can and put countless women’s lives at risk for their religious beliefs.

I’d say this is a new low for the GOP, but I am sure we haven’t seen anything yet.

May 19, 2016
Trump Supreme Court nominee: States should have right to jail people for ‘homosexual sodomy’
Next Post 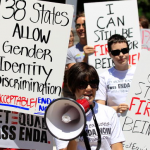 May 19, 2016 Study: 82% of transgender people face physical aggression during their lifetime
Recent Comments
0 | Leave a Comment
"Tom Hughes --- Gee, you're clearly quite intelligent. I bet you're in Mensa. The MAJORITY ..."
markinator Clarification on the now viral Wisconsin ..."
"Source in the Constitution?Again, you have not replied to my argument about any "except for" ..."
Alonzo Donald Trump vowed to destroy the ..."
"Tom, I gave explicit instances when getting ID and registering to vote might be difficult. ..."
Annerdr Clarification on the now viral Wisconsin ..."
"You do realise that the only person we've seen throw the word nazi around is ..."
TheMarsCydonia The Danthropology blog is moving on
Browse Our Archives
get the latest from
Nonreligious
Sign up for our newsletter
POPULAR AT PATHEOS Nonreligious
1