Right-wing nutjob Rush Limbaugh thinks the incident at the Cincinnati Zoo proves that evolution is a hoax because the gorilla that was shot and killed never “become one of us.”

He was insulting the PeTA activists (an easy thing to do) for opposing the capture and captivity of animals and said they had “obviously has not read Genesis.”

“There’s no way human beings are going to not be interested in animals,” he explained. “Gawking at them. Out on safari, hunting them.”

He then added that “the evolution crowd” was searching for a missing link because “they think we were originally apes.”

“If we were the original apes, then how come Harambe [gorilla killed in Cinicinnati] is still an ape?” Limbaugh asked. “And how come he didn’t become one of us?”

I wish he was joking, but this is on par with the amazing amount of religious ignorance that goes into evolutionary thinking. They seriously do not understand the basic fundamentals of the theory and Rush actually believes that “the evolution crowd” thinks that humans were once gorillas.

I mean, the man has Google, right? He can take 10 seconds to watch a video that explains the evolutionary tree of life and that gorillas and humans share a common ancestor, not that gorillas became humans?

This kind of blatant stupidity at his age is his own damn fault. This is self-imposed ignorance. He doesn’t want to know the truth and doesn’t want his listeners to either. 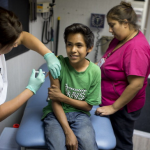 May 31, 2016
Google searches reveal that mandatory chickenpox vaccines are working
Next Post 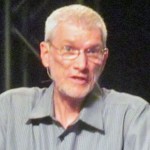 May 31, 2016 Ken Ham exploits Cincinnati Zoo gorilla killing to promote his anti-abortion beliefs
Recent Comments
0 | Leave a Comment
Browse Our Archives
get the latest from
Nonreligious
Sign up for our newsletter
POPULAR AT PATHEOS Nonreligious
1