Catholic blogger excuses Brock Turner rape because he was drinking and is probably ‘a normal guy’ June 10, 2016 Dan Arel

Brock Turner is a monster, he raped a passed out girl at a college party, and then was let off with a slap on the wrist by a judge who didn’t want to ruin the man’s future.

Yet, if you ask Patheos Catholic blogger Melinda Selmys, about Turner, she says is likely “a normal guy,” who is also “a rapist.”

She believes telling “boys” that not the best way to not rape someone is to, well, not rape someone, is actually wrong and blames our culture of “drinking” and “casual sex” for his actions.

“The problem being that casual sex is almost invariably sex between two people who are drunk,” she writes.

This argument assumes that not only is drinking involved but excessive drinking. It assumes people can’t go to a bar, meet, share a few drinks and decided they would like to have sex. No, according to Selmys, “Seeking sex from strangers is awkward. Most people cannot do it sober. Every person I’ve ever known who has engaged in promiscuity used alcohol to lower their inhibitions.”

Great anecdotal evidence there. I would bet that alcohol could play a small role in making people feel more comfortable with each other, more open in their discussions and perhaps even more open to hooking up when they may not normally. This does not, in any way change what Turner did.

Turner did not share a few drinks, take a girl home and sleep with her. She was passed out, unconscious, and he raped her. Yet, Selmys wants to argue he is not a monster.

She goes on to say that it’s “possible that he is just a normal college kid who got caught up in alcohol and promiscuity – just like he says he is. It’s possible that he started out having sexual encounters that were pretty clearly consensual, and then he had some that were less clearly consensual, but the girls were cool with it in the morning so he figured that his behaviour had been okay. It’s possible that he thought this girl was sending off signals, that when she left the party with him she was implicitly agreeing to sex.”

Okay, let’s say, for arguments sake they left the party, in agreement that they would go somewhere to have sex. Her passing out negates all of that. When she can no longer be an active participant in the sexual encounter, her possible consent goes out the door.

In closing out her rape apologist argument, Selmys says Turner should not be fully accountable for his own actions because he was drunk.

“The assumption is that rape is always a deliberate, sober choice made by men who habitually feel entitled to women’s bodies. It ignores the fact that drinking reduces a person’s ability to make good judgment calls, that it depresses rational thinking and increases disordered passions, that drunk people often feel entitled to have their desires gratified in ways that they don’t while sober,” she says.

By this very argument, a drunk driver is not a monster when they kill people by getting behind the wheel of their car. They had too much to drink and couldn’t make good choices. Yes, a perfectly seemingly good person who volunteers at an orphanage can drink too much and kill someone. We don’t turn around and excuse the killing and pretend they are not a murderer.

And yes, rape is deliberate. You are violating someone’s body. Not accidently, you didn’t accidently take off your pants and insert your penis in them. You deliberately carried out that act.

His level of intoxication is not excusable. Becuase we know one thing. The victim was unconscious, found half naked, non-responsive. Had she not been found, she could have died laying there behind a dumpster. Would we be worried about his future swimming career then?

Would his father call a murder conviction to strong for “20 minutes of action”?

When we discuss rape culture, this is what we are talking about. A culture that says women who are drunk and get raped are to blame for their own rape. Boys who get drunk and rape someone can’t be responsible for their actions because they are drunk.

Sorry, Melinda Selmys, but Brock Turner is a monster because he is a rapist.

June 10, 2016
How do we stop Donald Trump without supporting Hillary Clinton?
Next Post 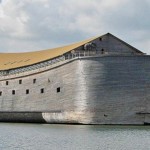 June 11, 2016 Noah's Ark crashes into a Norwegian Coast Guard vessel
Recent Comments
0 | Leave a Comment
"Tom Hughes --- Gee, you're clearly quite intelligent. I bet you're in Mensa. The MAJORITY ..."
markinator Clarification on the now viral Wisconsin ..."
"Source in the Constitution?Again, you have not replied to my argument about any "except for" ..."
Alonzo Donald Trump vowed to destroy the ..."
"Tom, I gave explicit instances when getting ID and registering to vote might be difficult. ..."
Annerdr Clarification on the now viral Wisconsin ..."
"You do realise that the only person we've seen throw the word nazi around is ..."
TheMarsCydonia The Danthropology blog is moving on
Browse Our Archives
get the latest from
Nonreligious
Sign up for our newsletter
POPULAR AT PATHEOS Nonreligious
1