I had the pleasure of being on Callie Wright and Ari Stillman’s Gaytheist Manifesto with another guest Jabari Brisport to discuss voting third party, specifically Green Party and for Jill Stein.

We discuss smart state voting, a strategic way to help third parties while at the same time not damaging the chances of electing a Democrat, in this case, strategically to stop Donald Trump.

We also address accusations against Jill Stein for being anti-vaccine and pro-homeopathy.

If you prefer your politics more progressive than Hillary can offer but you think voting 3rd party is tantamount to wasting your vote/letting Trump win, please give this a listen, especially if you live in a solidly red or blue state. Before we recorded this I was in that camp, but our two guests changed my mind on this issue. I believed that a vote for Green was purely a vote based on principle at the expense of strategy, but it turns out there are several strategic arguments for voting Green (if you don’t live in a swing state). After we recorded, I looked up the polls for Illinois and found out that Hillary currently has a 92% chance of winning my state, so this applies to me. I never thought I’d say this, but I think I might vote for Jill Stein, and I don’t have to worry about risking a Trump presidency while doing it.

Head over to the Gaytheist Manifesto today and have a listen.

UPDATE: Jill Stein recently clarified her position on vaccines and it was underwhelming, to say the least. Her clarified comments were not vague, they were straight anti-vaxx pandering and while she says vaccines work, she pushes the myth that they could be dangerous. I have written and update here. 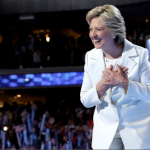 July 29, 2016 Jill Stein may not be 'anti-vaccine' but I am furious about her position and comments
Recent Comments
0 | Leave a Comment
"Tom Hughes --- Gee, you're clearly quite intelligent. I bet you're in Mensa. The MAJORITY ..."
markinator Clarification on the now viral Wisconsin ..."
"Source in the Constitution?Again, you have not replied to my argument about any "except for" ..."
Alonzo Donald Trump vowed to destroy the ..."
"Tom, I gave explicit instances when getting ID and registering to vote might be difficult. ..."
Annerdr Clarification on the now viral Wisconsin ..."
"You do realise that the only person we've seen throw the word nazi around is ..."
TheMarsCydonia The Danthropology blog is moving on
Browse Our Archives
get the latest from
Nonreligious
Sign up for our newsletter
POPULAR AT PATHEOS Nonreligious
1