In what is a clear violation of the 1954 Johnson Amendment and should be grounds for the loss of tax-exempt status, pastors are endorsing political candidates from the pulpit.

This is according to a new study by Pew Research that says one in ten churchgoers have heard their pastors make an official endorsement.

The study states that pastors are discussing varies political issues, such as religious liberty, homosexuality, abortion, and immigration, which is completely legal, but many go further and suggest who their congregation should be supporting.

Republican presidential nominee Donald Trump has promised to overturn the Johnson Amendment, saying that churches should be allowed to openly endorse candidates, something the Secular Coalition is speaking out against.

The Secular Coalition for America strongly opposes the repeal of the Johnson Amendment. As religious nonprofits, churches are not only exempt from paying taxes but are also exempt from even the most basic transparency requirements. Secular nonprofits are required to file a 990 tax form which makes information about their sources of funding, governance structure, and expenditures publicly available. Religious nonprofits are exempt from disclosing any of this. Allowing churches to endorse candidates for public office would effectively unleash a new wave of dark money into the political system, similar to Super PACs. This would threaten the separation of church and state by transforming churches into political actors and by turning the charitable contributions of parishioners into potential campaign dollars.

And while Trump may wish to overturn the law, that has not yet been done and the IRS should be actively finding these churches and punishing them for their actions. Until that happens, churches have no reason not to politic from the pulpit because they can seemingly do so with impunity.

August 7, 2016
Williamstown mayor says Ark Encounter is not the economic boon they expected
Next Post 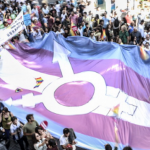 August 8, 2016 Study: Transgender distress stems from rejection and violence, not a mental disorder
Recent Comments
0 | Leave a Comment
"Tom Hughes --- Gee, you're clearly quite intelligent. I bet you're in Mensa. The MAJORITY ..."
markinator Clarification on the now viral Wisconsin ..."
"Source in the Constitution?Again, you have not replied to my argument about any "except for" ..."
Alonzo Donald Trump vowed to destroy the ..."
"Tom, I gave explicit instances when getting ID and registering to vote might be difficult. ..."
Annerdr Clarification on the now viral Wisconsin ..."
"You do realise that the only person we've seen throw the word nazi around is ..."
TheMarsCydonia The Danthropology blog is moving on
Browse Our Archives
Follow Us!