There are a million reasons to dislike Libertarian presidential candidate Gary Johnson. I listed five important ones a while back but this new claim by Johnson only exemplifies his idiocy.

When discussing his thoughts on what he calls the “long-term view” of climate change, Johnson basically said it doesn’t matter. “In billions of years,” he said in 2011, “the sun is going to actually grow and encompass the Earth, right? So global warming is in our future.”

He did say he believes that humans are making the climate warmer but that he doesn’t think the government should do anything about it. That’s because he is an idiot, I mean, a Libertarian (same thing?) and doesn’t think our government should play any role in making the lives of people better. Johnson is a moralless social Darwinist at best, and just an asshole at worst.

Just this year, when HBO host Bill Maher asked Johnson if he had a plan to combat climate change, he said “no,” and told the Real Time host that the free-market would take care of that one its own.

September 21, 2016
Stephen Hawking and more than 300 other scientists urge Americans not to vote for Donald Trump
Next Post 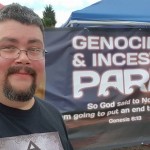 September 22, 2016 How atheist activist Adam Collins got sober without God
Recent Comments
0 | Leave a Comment
"Tom Hughes --- Gee, you're clearly quite intelligent. I bet you're in Mensa. The MAJORITY ..."
markinator Clarification on the now viral Wisconsin ..."
"Source in the Constitution?Again, you have not replied to my argument about any "except for" ..."
Alonzo Donald Trump vowed to destroy the ..."
"Tom, I gave explicit instances when getting ID and registering to vote might be difficult. ..."
Annerdr Clarification on the now viral Wisconsin ..."
"You do realise that the only person we've seen throw the word nazi around is ..."
TheMarsCydonia The Danthropology blog is moving on
Browse Our Archives
get the latest from
Nonreligious
Sign up for our newsletter
POPULAR AT PATHEOS Nonreligious
1