Ken Ham is really excited that a creationist designed a bicycle

Ken Ham and most creationists are always eager to find mainstream scientists who accept creationism. Though it’s rare, it can happen from time to time, but usually with rather big caveats.

Usually, Ham touts the name of Raymond Damadian, who creationists claim invented the MRI. The claim is actually a lie — he was part of a larger team that created the MRI, and when the team was awarded the Nobel Prize for their work, Damadian was not included because of how little he contributed.

Now, however, Ham has a new creationist champion. Some guy who designed a bicycle. How underwhelming.

Professor Stuart Burgess is a professor of engineering design at the University of Bristol in the United Kingdom. He has an impressive resume! He’s won multiple awards for his engineering design work, holds seven patents, and even designed parts of rockets and spacecraft for the European Space Agency. And he’s a biblical creationist who has spoken for Answers in Genesis both here in America and across the UK.

Now, normally if you’re going to tout a scientist who accepts creationism you would want to find someone in the field of biology, anthropology, chemistry, etc. Something related to evolution, anything really. Not usually a guy who designed a bike.

Of course, creationists can be scientists and engineers, but they can’t be overly successful in certain fields if they reject biological evolution. You don’t, however, need to accept evolution to draw a bicycle on a piece of paper.

All this tells me is that Professor Burgess knows aerodynamics rather well, but when it comes to biology, he doesn’t understand it or chooses not to. 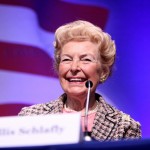 September 5, 2016
Phyllis Schlafly is dead and should be remembered as a horrible human being
Next Post

September 7, 2016 Jill Stein to face vandalism charges after North Dakota protest
Recent Comments
0 | Leave a Comment
Browse Our Archives
get the latest from
Nonreligious
Sign up for our newsletter
POPULAR AT PATHEOS Nonreligious
1