The Satanic Temple responds to being misrepresented by Missouri newspaper

On August 31, the News-Leader ran an article presenting a digest version of the news, which they call SpringFi. In it, the News-Leader had this to say about the controversy surrounding the accusations that The Satanic Temple is a hate group:

“At the most recent City Council meeting, Councilwoman Kristi Fulnecky called the Satanic Temple a ‘hate group.’ As you may recall, the vaguely Satan-y temple wants to start an After School Satan Club in Springfield as part of its mission to ‘encourage benevolence and empathy among all people.’

Her ‘hate group’ line got walloped on Twitter. One Satanist bro (who we are certain is really benevolent and empathetic) wondered aloud whether Fulnecky wears her assertively colorful lipstick while engaged in, shall we say, intimate activities. Tweets so tawdry even SpringFi won’t embed ’em, though if you avail yourself of Twitter’s advanced-search function you can gawk.”

“This is truly some of the most dishonest, irresponsible reporting I’ve encountered in years of doing controversial media. I see today that, not only did you fail to put the relevant question to Fulnecky, but the News-Leader seems to summarize us by some random insulting tweet against Fulnecky. Do you want to see some of the daily barrage of ugly, threatening tweets, emails, and comments I get? Would this somehow convince you that Christianity is a hate group?”

Greaves told me that he “emphasized the issue of Liberty Counsel as an SPLC [Southern Poverty Law Center] hate group again and again” when talking to the News-Leader. The Satanic Temple’s After School Satan Club program is meant as an alternative to the evangelical Good News Clubs, which are backed by Liberty Counsel. When Kristi Fulnecky complained that parents didn’t want “hate groups” in the schools, The Satanic Temple raised the obvious question of whether or not Fulnecky would support the removal of the Good News Clubs from Springfield schools since they have an actual tie to a hate group.

However, this legitimate point doesn’t seem to fit the News-Leader editorial staff’s preferred narrative. In an email forwarded to me, the News-Leader’s Alissa Zhu wrote that “In an updated version of the story I had included a paragraph about the allegations that Good News Clubs are tied to the Liberty Counsel, but it did not make the cut.” The fact that the major issue raised by The Satanic Temple wasn’t worthy of the final cut is nothing more than a complete and conscious failure of the editorial staff to do their jobs as journalists. It seems that the News-Leader would prefer to mock The Satanic Temple rather than present their readership with actual journalism.

Since I am a member of The Satanic Temple, when I write blog pieces on the subject I try to be as neutral as possible.

I’m not going to do that in this case.

The SpringFi article is, in my opinion as a writer, complete trash. It is a poorly written, tabloid-esque misrepresentation of the entire situation. It is worthy only to be printed alongside stories about Bat Boy and celebrity feuds. To quote Greaves’ rhetorical question to the News-Leader, “How is it relevant that some fool commented about [Fulnecky’s] lipstick?” It isn’t relevant. However, by making it seem relevant, the News-Leader makes it appear as though the hateful ad hominem attacks against Fulnecky are the official view of The Satanic Temple. Lucien Greaves said on the matter, “Could we be represented any more dishonestly than to present that tweet as somehow indicative of our arguments against Fulnecky?”

For the sake of clarity, Alissa Zhu did not write the SpringFi article. Her email was about a separate article run by the News-Leader. I included her email message to show that the News-Leader consistently and consciously made decisions that resulted in the misrepresentation of The Satanic Temple’s argument against Fulnecky. 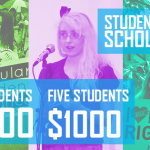 September 2, 2016 Say goodbye to the scam that is antibacterial soaps
Recent Comments
0 | Leave a Comment
Browse Our Archives
Follow Us!