How the fight over ‘In God We Trust’ is winnable

Earlier this month, I was in Sacramento, CA for California Freethought Day representing The Original Motto Project. At The Original Motto Project, we oppose the use of “In God We Trust” (IGWT) in favor of the more inclusive, secular motto E Pluribus Unum. For those that skipped Latin class, E Pluribus Unum is translated into English as “From Many, One.”

Whenever I attend conferences like Freethought Day, there is never a shortage of atheists and secularists who express to me how irksome they find our current national motto. I often hear words of encouragement like “keep up the good fight” or “I love what you guys are doing.” Unfortunately, usually those words of encouragement are just simply that: words. Very rarely does the sentiment translate into action.

Last year, I wrote about some of the difficulties behind opposing the national motto. In that blog piece, I focused primarily on how supporters of IGWT view the phrase. I forgot to mention another major stumbling block: atheists and secularist who do nothing about proposals to display the motto in places like court rooms, city halls, sheriff’s vehicles, schools, and other government buildings. Despite how IGWT vexes atheists and secularists, most of them do nothing when push comes to shove. My blog post last year was titled Why the fight over “In God We Trust” is Unwinnable. Well, I need to correct myself: the fight is winnable. I know, because I was part of a movement that defeated it in Springfield, Missouri.

In June of last year, city councilmember Justin Burnett attempted to put the offending phrase up in Springfield city council chambers. Instead of just complaining about it, the secular community came together and actually did something about it.

I personally called Councilmember Burnett when he appeared on a local radio show to promote the use of the motto. Other members of the community wrote letters to the editor expressing their displeasure with the proposal. Jim Broadstreet, sr. called the proposal “ludicrous.” Another Springfield resident, Ted Salveter, wrote, “[Burnett] claims [displaying In God We Trust] is ‘to recognize our nation’s rich heritage.’ Not to promote a specific religion. If not Christianity, what ‘God’ is he referring to? Any god? No god?” Several other members of the community, including myself, wrote letters to the mayor and other members of city council urging them to reject the proposal to display he obviously religious motto.

Members of the community also signed up to speak at the city council meeting where the proposal would be discussed. The local atheist club from Missouri State University also got involved. Rikki Rodger, who was Vice President of Freethinkers and Skeptics of Missouri State University (FSMSU), attended the city council meeting along with several members of FSMSU. Rodger told me, “we decided to attend the next town hall meeting which would cover the IGWT issue in order to deliver testimony against using IGWT in Springfield’s City Hall. Our President, myself, and a few other members, including members from other local atheist organizations, attended—and then walked out when the council decided to table the topic before any of us got the chance to make our voices heard.”

The obvious division created by the use of the phrase and the willingness of local secular activists (not everyone opposed to the idea was an atheist) to engage in a public conversation about this topic lead to it being tabled by the city council. It later died a quiet death in committee.

The point I’m making here is that the fight over IGWT can be won if atheists and secularists are willing to stand up and say something. Politicians don’t like controversy, so by making the topic controversial and by having a united message, the more likely it is that proposals like Councilmember Burnett’s will be defeated. However, that requires actually doing something and being part of the conversation.

A final note: be gracious in victory. Activism of this kind doesn’t stop when the proposal dies. A few months after the contentious debate over the motto, Rikki Rodger and I met with Councilmember Burnett for coffee. The topic of the motto came up and he expressed to us that he really didn’t know that it would be that controversial of a topic. During our exchange, which was much friendlier than our radio conversation, Burnett told me that if the issue ever came up again, he wouldn’t support the measure. Instead, he said he would support E Pluribus Unum being displayed in the city council chambers, as it more accurately reflected the diversity of our community. 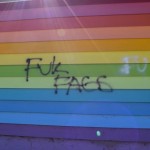 October 27, 2016 Bullet holes and graffiti found on The Equality House across from Westboro Baptist Church
Recent Comments
0 | Leave a Comment
"Tom Hughes --- Gee, you're clearly quite intelligent. I bet you're in Mensa. The MAJORITY ..."
markinator Clarification on the now viral Wisconsin ..."
"Source in the Constitution?Again, you have not replied to my argument about any "except for" ..."
Alonzo Donald Trump vowed to destroy the ..."
"Tom, I gave explicit instances when getting ID and registering to vote might be difficult. ..."
Annerdr Clarification on the now viral Wisconsin ..."
"You do realise that the only person we've seen throw the word nazi around is ..."
TheMarsCydonia The Danthropology blog is moving on
Browse Our Archives
Follow Us!

Coronavirus and the Christian crazies: round-up # 3
• Pastor says "true Christian" would be willing to die from...
view all Nonreligious blogs
What Are Your Thoughts?leave a comment
Copyright 2008-2020, Patheos. All rights reserved.