Republican Senator Jeff Session said on Sunday night that grabbing a women’s genitals, as described by Donald Trump, is not sexual assault.

“I don’t characterize that as sexual assault,” Sessions told The Weekly Standard. “I think that’s a stretch. I don’t know what he meant.”

“So if you grab a woman by the genitals, that’s not sexual assault?” the reporter asked Sessions.

“I don’t know,” the senator replied. “It’s not clear that he — how that would occur.”

To be clear, sexual assault is defined as any kind of unwanted sexual contact.

How Senator Sessions doesn’t understand that this is sexual assault is beyond me, but does give us all a peek into the mindset of Republican politicians who continue to support a known sexual predator and accused child rapist, for president.

October 10, 2016
No, Ken Ham, we don't need Christianity to know what Donald Trump said was wrong
Next Post 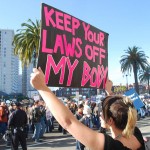 October 11, 2016 Oklahoma court permanently blocks anti-abortion bill that would make providers felons
Recent Comments
0 | Leave a Comment
Browse Our Archives
get the latest from
Nonreligious
Sign up for our newsletter
POPULAR AT PATHEOS Nonreligious
1