The Vice Presidential Debate gave us some insight into the candidates church/state views October 5, 2016 Dan Arel

While most of the Tuesday night Vice Presidential Debate was talking over each other we did learn a few things about the candidates and one of the most important topics to come up was the topic of faith, and with that, a women’s right to abortion access. Democratic VP nominee Tim Kaine said he believed that a person’s faith was important, but did not believe that someone’s faith should influence public policy. Republican Mike Pence strongly disagreed.

“Last night the American people saw the difference between a candidate who respects the separation of church and state and one who does not,” said Larry Decker, Executive Director of the Secular Coalition of America. “In a secular country, lawmakers have a constitutional duty not to write their personal religious beliefs into law. Senator Kaine displayed an exemplary understanding of this principle when he said that a lawmaker’s personal religious beliefs should never influence the decisions they make as a public servant. Governor Pence stood as a near perfect contrast to this approach. He drew a straight line between his religious beliefs and the cruel anti-choice policies he supported while serving as Governor of Indiana.”

Pence said he was proud of his anti-choice stance, relying heavily on his faith to influence policy and said he spends a great deal of time on his knees each day, presumably, he meant for praying.

“The stark difference between Senator Kaine and Governor Pence demonstrates the significance of their disagreement,” Decker continued. “The exchange that occurred on the issue of reproductive rights could have undoubtedly played out on a variety of issues, including climate change, science education, and religiously-based discrimination. This is why it imperative that voters get informed about each candidate’s view on the proper relationship between religion and government. The secular approach to governing outlined by Senator Kaine last night is the only way to guarantee that Americans of every faith and no faith are free to decide for themselves what role, if any, religion will play in their lives. The twisted definition of religious freedom embraced by Governor Pence puts this decision in the hands of lawmakers, who write beliefs into the laws of the land. On November 8, it imperative that Americans know which vision of religious liberty they are voting for.” 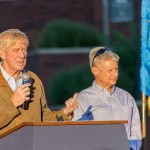 October 5, 2016
Libertarian VP candidate is now running to ensure that Hillary Clinton is elected
Next Post 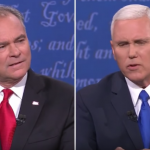