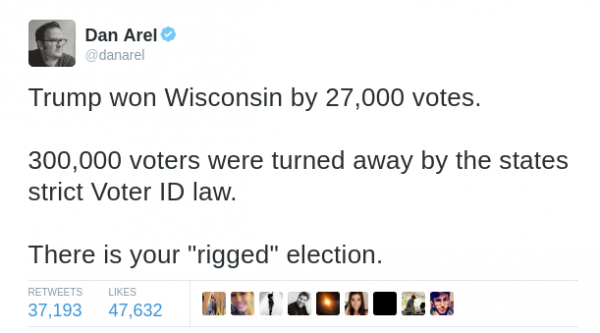 One day after the election of Donald Trump, I was researching voter turnout and third-parties for an article I posted here.

During that research, I came across this article from The Nation. In it, they write:

We’ll likely never know how many people were kept from the polls by restrictions like voter-ID laws, cuts to early voting, and barriers to voter registration. But at the very least this should have been a question that many more people were looking into. For example, 27,000 votes currently separate Trump and Clinton in Wisconsin, where 300,000 registered voters, according to a federal court, lacked strict forms of voter ID. Voter turnout in Wisconsin was at its lowest levels in 20 years and decreased 13 percent in Milwaukee, where 70 percent of the state’s African-American population lives, according to Daniel Nichanian of the University of Chicago. I documented stories of voters in Wisconsin—including a 99-year-old man—who made two trips to the polls and one to the DMV on Election Day just to be able to vote, while others decided not to vote at all because they were denied IDs.

I was angry, and rightfully so. We already know how damaging voter ID laws are and that they often target minority communities and work to suppress Democratic votes.

300,000 voters were turned away by the states strict Voter ID law.

There is your “rigged” election.

Oops, did I say “turned away”?

That’s not exactly what happened, but it’s more likely nearly 300,000 didn’t vote based on not having proper identification.

When discussing the claim with someone, I did send a tweet clarifying further.

This is why a tweet with some slight misinformation still exists and was not deleted. I am willing to take some embarrassment for a mistaken tweet if the end result is a massive discussion on the legality and ethics of voter ID laws.

For me, that’s far more important.

Even if you flip WI for Clinton she still loses, so the 300,000 number changes nothing. We don’t even know if they all voted it would have changed the outcome of the state.

However, we must change voting in the US. We must either issue everyone, hassle free a voter ID card or better yet, do away with the law once and for all. Voter fraud is almost completely nonexistent. We don’t need to make voting harder, we need to make it easier. Once one party starts making it harder for the other party’s supporters to vote, you do have a rigged election system.

If my tweet can spark that conversation, albeit being a little incorrect, so be it. I am happy to play a role.

Let’s stop talking about the numbers in Wisconsin and let’s put an end to voter suppression once and for all.

November 13, 2016
Don't fall for the claim that Donald Trump will defend same-sex marriage
Next Post

November 15, 2016 Ben Carson will not accept a cabinet role in the Trump administration
Recent Comments
0 | Leave a Comment
"Tom Hughes --- Gee, you're clearly quite intelligent. I bet you're in Mensa. The MAJORITY ..."
markinator Clarification on the now viral Wisconsin ..."
"Source in the Constitution?Again, you have not replied to my argument about any "except for" ..."
Alonzo Donald Trump vowed to destroy the ..."
"Tom, I gave explicit instances when getting ID and registering to vote might be difficult. ..."
Annerdr Clarification on the now viral Wisconsin ..."
"You do realise that the only person we've seen throw the word nazi around is ..."
TheMarsCydonia The Danthropology blog is moving on
Browse Our Archives
Related posts from Danthropology