Don’t be fooled by the suddenly feel good story going around the Internet that president-elect Donald Trump thinks same-sex marriage is the law.

He very well might believe that, but the congress this country idiotically elected, and the backward thinking voters who did so, sure do not think that.

We have no reason to think Trump would not sign a bill that chips away at marriage equality or won’t assign Supreme Court Justices who will take up a challenging case and overturn the previous ruling.

Trump said a lot on his campaign trail he seems to be backing away from now, but that does not believe the extremists in congress won’t try and pass every insane law he promised to push forward.

Even if Trump does uphold same-sex marriage, which would be great, he did promise on Sunday to deport three million people living in the US.

Yet, with the news of his election being so grim, Americans seem to be looking for any glimmer of hope that he may turn out to be a good president.

This is a dangerous way of looking at Donald Trump.

We must look at his campaign and his cabinet choices. He is currently considering Steve Bannon of Breitbart News, to be his chief strategist. Trump is literally giving white nationalists a place in his White House. Breitbart has a section on their news site called “Black Crime,” so let’s not pretend that overnight Trump has become a “softer” politician.

We must resist Trump and not fall for the media love story as they try to put lipstick on the pig they created. 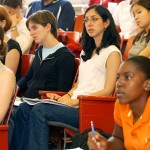 November 12, 2016
Students wrongfully sue the University of Wisconsin over the right to teach religion
Next Post 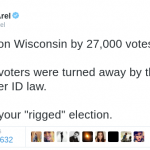 November 14, 2016 Clarification on the now viral Wisconsin voter suppression tweet
Recent Comments
0 | Leave a Comment
Browse Our Archives
get the latest from
Nonreligious
Sign up for our newsletter
POPULAR AT PATHEOS Nonreligious
1