No, Hillary Clinton did not try and ban flag burning in 2005

On Tuesday, Donald Trump suggested that burning the American flag should be punishable by a $1,000 fine and a year in prison.

Anti-Clinton reactionaries on both sides of the aisle are quickly trying to point out that in 2005, Hillary Clinton sponsored a bill about flag burning. Are they right?

Trump’s statement, of course, caused an uproar from free speech advocates who understand that flag burning is an act of protest and protected by the first amendment. Denying that right is a denial of free speech rights and is anti-dissent.

This makes Trump no better than many of the world’s worst dictators who took nationalism to this extreme.

So what about Clinton’s law?

Part 1: Destroying or damaging a U.S. flag with the primary purpose and intent to incite or produce imminent violence or a breach of the peace.

While too vague, it tries to say that if you’re burning the flag, not as an act of protest but an act to incite violence against the US or its people, that would be a federal offense.

This isn’t much different than our banning of language that does the same. Yes, you have free speech, but you can’t tell a crowd to go murder someone.

The biggest problem is that the language doesn’t specify who decides what is inciting violence and how much proof is needed. If a group of socialists burned the flag it’s all too possible that an official could see that as inciting an armed revolution.

Still, this does not compare to simply burning the flag and going to prison.

Part 2: Intentionally threatening or intimidating any person, or group of persons, by burning a U.S. flag

Basically, see above. This isn’t about burning the flag but instead is focused on why.

Part 3: Stealing or knowingly converting the use of a U.S. flag belonging to the United States, or belonging to another person on U.S. lands, and intentionally destroying or damaging that flag.

This is basically useless. Stealing federal property no matter what you do with it is already illegal.

The whole law is for show and sounds patriotic, something that would have gained a lot of support in 2005 from both parties.

Yes, Clinton is wrong for being a part of it but we must be careful when trying to compare this nonsense with a minority-president-election arguing that anyone who burns the flag deserves time in prison.

The fact anyone is comparing these two ideas is ridiculous.

November 29, 2016
Ken Ham only likes science when it can be used to bully and harass the LGBTQ community
Next Post 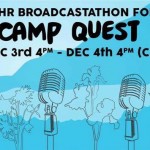 December 1, 2016 Join me this weekend and help raise money for Camp Quest!
Recent Comments
0 | Leave a Comment
"Tom Hughes --- Gee, you're clearly quite intelligent. I bet you're in Mensa. The MAJORITY ..."
markinator Clarification on the now viral Wisconsin ..."
"Source in the Constitution?Again, you have not replied to my argument about any "except for" ..."
Alonzo Donald Trump vowed to destroy the ..."
"Tom, I gave explicit instances when getting ID and registering to vote might be difficult. ..."
Annerdr Clarification on the now viral Wisconsin ..."
"You do realise that the only person we've seen throw the word nazi around is ..."
TheMarsCydonia The Danthropology blog is moving on
Browse Our Archives
get the latest from
Nonreligious
Sign up for our newsletter
POPULAR AT PATHEOS Nonreligious
1