Iowa Governor Terry Branstad, when asked by atheist activist Justin Scott how politicians, especially Republican ones, can reach out to the religiously unaffiliated and atheists and get them engaged in the process.

Branstad, however, didn’t address the actual question and instead implied that they need to be led to God, not reached out to as atheists and brought into the system.

“How do we get them involved? What do we do with them?” Scott asked.

“Well, I think we need to try to lead by example. I mean, it’s like, you know, taking our children to church and encouraging them to get involved,” Branstad replied, avoiding the question.

Scott didn’t let him off the hook.

“But many of the non-believers don’t go to church,” he pushed.

That’s when Branstad insisted it was up to the parents.

“I know,” quipped the governor. “But that’s a reason why parents need to try to provide some leadership and encourage that. And encourage our children to stay involved, even when they go off to college. And that’s a challenge.”

I suppose the governor doesn’t think atheist parents exist and that they are the voters he is ignoring.

This is why Republicans, or at least one reason why they are not gaining support “nones” and atheists. They believe conversion is better than engagement. They blame parents for atheists, or even in the case, college.

Scott is doing the country a great service by keeping the pressure on all politicians to answer to atheist voters and helping us all learn where these men and women stand on key issues. 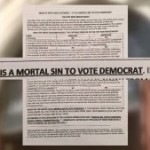