It’s Time to Engage with the Opposition

It’s Time to Engage with the Opposition November 23, 2016 Matthew O'Neil

It’s been a few weeks since Donald Trump has been elected President of the United States. I know people are sick of hearing about this, and I know people are scared. They have every right to be both. Trump has been caught on camera, and tape, advocating for violence against protestors at his rallies, joking about sexually assaulting women, then saying he wouldn’t because those who accuse him of it don’t meet his standard of attractiveness, mocking a disabled reporter, and on, and on, and on. To top it all off, his running mate, Mike Pence, has advocated for some of the most restrictive LGBTQ laws in his state of Indiana, as well as argued they will repeal the marriage equality act.

It’s no wonder that hate crimes have risen so dramatically, higher than those reported after September 11, 2001, since their election.

I worry for women of our country. I worry for the LGBTQIA+ communities. I worry for Arab-Americans, Latino Americans, People of Color in general. It’s not necessarily a case of what can, or will, happen during a Trump/Pence Presidency and Republican-dominated house. It’s what that represents to the American people. And what it appears to represent is that it’s okay to do all of the things Trump has done and fought for. At least, if there was or is any idea of progress in Trump’s platform, it’s been overlooked, or overshadowed, by the coverage of his hate-filled platform.

Like many people, I’ve been searching for answers as to how this unfolded. It seemed so clear that Clinton would win, that the anxiety I was brushing aside was just a moment of panic about a future that so clearly looked blue instead of red. And what I found, reading article after article, study after study, suggests something we haven’t really been paying attention to. I am of the impression that, if we had paid attention, we might have been able to avoid this. Maybe. It’s too late now, but perhaps making this realization can help us for the 2018 elections, and perhaps the next POTUS election.

PEW Research Center had released a study earlier this year demonstrating, even in the first line, that we are severely divided in this country. People are shifting further left and right in their respective political positions than they have, since at least 1992. Almost 50% of people, identifying as either Democrat or Republican, are fearful, angry, or frustrated with the opposing party. We are each getting stuck in echo chambers that are too willing to block out the opposing side, as we are becoming more and more certain in our own positions.

Before I get much further, I want to emphasize one important thing: You, the reader, have experiences completely unique to you. Your experiences shaped who you are, how you critique information shared with you, whether you critique it at all, what outlets your view as reliable, what values are important to you, and so on. We can control a number of things in our lives, but we cannot control the genetics we have or the environments we are born into. And those are two crucial things we need to consider when talking about politics and working with others.

Allow me to demonstrate; I teach. But I don’t just teach anywhere, I teach in a prison. It’s technically a social work job, but it entails me working with a number of people who have completely different backgrounds and experiences than my own. I like to consider myself a fairly self-aware male. By that I mean I am conscious of my privilege by being a white, cisgender, straight, male. However, if I went to the inmates that I teach and tried to teach them that they have privilege by being (mostly) within the same category as myself, how receptive do you think they would be? Yes, they’re in jail. But they would use that fact, or the fact they likely grew up in impoverished environments, lacked access to education, or any number of factors, to suggest otherwise. In other words, they would call bullshit on my claim that they are privileged to any degree.

Now, let’s put this into a larger perspective. Cracked, despite being a comedy site, put out an article detailing the problem with this last election. Within the article is how each county in the US voted in this election. Democrats look like what people would expect looking at Gary Johnson’s numbers rather than Clinton’s. What becomes clear while analyzing the map is that it’s not state-vs-state, but country-versus-city. And the analogy used in the article is brilliant; imagine Luke Skywalker and his background as detailed in “A New Hope.” He’s a country boy! And Darth Vader? He’s part of the evil Empire! The fancy, upscale, high-tech Death Star! Now think about how this trope is used in numerous movies. Country folk are simple, their needs are either not being met or taken from them, and the people in the power look down upon the simple folk from their high towers.

Trump was Luke Skywalker to the people. At least in the places where it mattered (at the time of writing, Clinton has the popular vote by over two million). And in a year where the election mattered, and almost half of voters did not turn up to the polls, that matters. A lot.

All of Trump’s issues, problems, criticisms by others, were enough to show Trump was as human as any other person. His salesman language, the use of the word “folks,” and “we” statements versus “I” and “you,” made him all the more appealing. Much more so than we gave him credit for. Despite what others suggest, even in their most racist moments, as Alix Jules pointed out in his brilliant speech “Tell Me Again You’re Not Racist,” do people ever admit to being racist. During the first half of the twentieth century, when lynchings were investigated, no lynchers were ever found. It was shrugged off as a mystery, labelled as “lynchings at the hands of persons unknown,” despite the fact that there was clearly innumerable cases of lynchings happening to People of Color during this time. David Duke and George Wallace, people that can objectively be identified as individuals whom have advanced, or do advance, and empower racist tropes, deny that they are racist.

It all seems to be for nothing. We seem to be at a curious crossroads where a lot of us feel like maybe, just maybe, we can’t actually advance any further. Especially since this fight we’ve been enduring has only led us to a dumpster fire. Or at least what we perceive as a dumpster fire.

Here’s an idea, again without asking you to set aside or ignore your values; try listening. More than that, try turning listening into a conversation.

Here’s an example of what I’m talking about. Someone I work around happened to be in a staff meeting with myself and my coworkers and we were talking about how our jobs have made us better people. I stated openly that this job had made me more aware of my privilege, much as I did earlier in this article. This someone, we shall call him Frank, stated that he felt inmates who “complain about their race, income, or what-have-you,” simply are using those things as excuses not to work hard in order to advance themselves. Fortunately, one of my coworkers jumped in to challenge him on that, and we moved on after she offered her two cents.

A short while later, as I returned to my office (one that I share with Frank), he asked “So, do you think it’s impossible for people of color to move up in our society?” I took a deep breath to collect my thoughts, and told him “No, but I think it’s exceptionally harder for them to do so.” We engaged in a conversation for the next little bit about race, privilege, opportunities available based upon race, resources provided to people, and how imbalanced it is.

What’s apparent about this conversation is that Frank holds some racist stereotypes, but he doesn’t hold them intentionally. And intention is important to consider when confronting issues like these. Frank is considerably older than me, he’s from a different era and, honestly, it would be a miracle to get him into the same field of thought as me. That’s not me giving up, feeling defeated, or even labeling Frank. But the problem is, if I do label him that, and I do argue that what he’s saying is racist, I feel there is enough research to show that he would shut down and refuse to engage in conversation with me. The terms “racist” and “racism” are heavy words to throw around, and as Alix Jules has demonstrated, the person on the receiving end of those words are more likely to work to defend their position as not racist than to hear you out on why you think that is.

Psychologists, conflict negotiators, counselors, salespeople (like Trump), and others emphasize that building rapport with the people they work with is most effective in gaining trust and having their message heard. Trump did it with how he spoke to people. And people should take that into consideration when conversing with others. Again, don’t lose your values and position, but hear out the people who oppose your own. Canada did this a number of times, and they offered middle ground opportunities, took risks with politically opposing views and positions, and were able to advance successfully. It is not unreasonable, or ridiculous, for two opposing viewpoints to work together and, potentially, meet in the middle.

One last thing to take in. In spite of political leaders and our (lack of) confidence in them, it takes we, the people, to help implement change. Minds do not change on their own. Positions do not get challenged without challengers. And conversations do not happen with a single person, or with a single group with the same opinion. It requires action. It requires speaking up and speaking out. It requires you. More than that, it requires you to actually listen and to see how you can engage the person in a way that does not make them shut you out, especially if the subject is important to you. 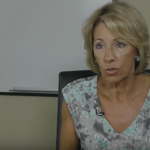 November 24, 2016 Danthropology Podcast episode 4 - Matthew O'Neil: A Secular Trump Strategy
Recent Comments
0 | Leave a Comment
Browse Our Archives
get the latest from
Nonreligious
Sign up for our newsletter
POPULAR AT PATHEOS Nonreligious
1