Ken Ham only likes science when it can be used to bully and harass the LGBTQ community November 29, 2016 Dan Arel

Ken Ham hates science. He claims he loves it but rejects most of it unless, of course, it agrees with him and his bible. This is rare, and usually, it goes just like it did today.

A new study from two professors at John Hopkins University — which is actually nothing but a collection of studies, viewed through the eyes of biased anti-LGBTQ researchers — suggests that gay and transgender individuals are not born that way, and claims that this claim is scientific.

Suddenly, Ham loves science. “It shouldn’t surprise those who believe Scripture that many popular opinions on LGBT issues aren’t supported by science. According to God’s Word, marriage is for one man and one woman for life (Genesis 2:22, 24), and we were created male and female (1:27),” Ham wrote in a blog post.

“What happens when scientific findings clash with popular opinions? Academic bullying. At least that’s what happened to scientists whose comprehensive study of scientific literature contradicted the beliefs of the Human Rights Campaign (HRC),” he wrote.

How did HRC bully Hopkins? By saying they would lower the school’s ranking on the Healthcare Equality Index.

Ken Ham spreads misinformation about homosexuals to the degree that they take their own lives but saying you’ll lower an organization’s ranking, that’s the real bullying.

“This kind of intimidation suppresses academic freedom. Powerful groups shouldn’t cow researchers into not publishing research findings that contradict popular ideas. After all, doesn’t science advance by scrutinizing research on both sides of a debate?”

Except the paper wasn’t actually research. The researcher didn’t do any of his own work and blatantly cherry-picked information from other researchers to come to his conclusion. His methods should be questioned and if they are bullshit, as they are, the journal and researcher should be held accountable. That’s how science works. Ham wouldn’t have a clue.

All of this and people still think we should treat Ham with respect? 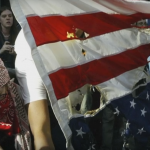 November 30, 2016 No, Hillary Clinton did not try and ban flag burning in 2005
Recent Comments
0 | Leave a Comment
Browse Our Archives
get the latest from
Nonreligious
Sign up for our newsletter
POPULAR AT PATHEOS Nonreligious
1