A Catholic Church in San Diego published a flier this week that stated that it was “immoral” for Catholics to vote Democrat. A clear violation of their tax exempt status.

The flier even goes as far as to call Hillary Clinton satanic, reports NBC News in San Diego.

When asked about the flier, Richard Perozich, the priest at the Immaculate Conception Church  said, “The fact that somebody took this and then made it public took it out of context.”

I am not sure how you can take that line out of context or the fact this church is guilty of politicking.

Every election cycle churches seem to find ways to meddle in elections and the IRS never does a thing. This was the topic of my most recent podcast with Freedom From Religion attorney, Andrew Seidel. For years, the IRS didn’t even have someone on staff to handle these complaints and even today, it seems little to no action is being taken.

For their part, the archdiocese’s reprimanded the church and warned others against doing the same thing.

“Let me stress again that while we have a moral role to play in explaining how Catholic teaching relates to certain public policy issues, we must not and will not endorse specific candidates, use parish media or bulletins to favor candidates or parties through veiled language about selectively chosen issues, or engage in partisan political activity of any kind,” wrote Bishop Robert McElroy in a letter to priests and pastors in the Diocese on Thursday. 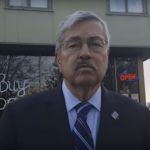 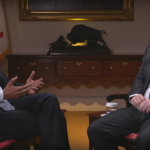 November 4, 2016 President Obama discusses atheism with Bill Maher
Recent Comments
0 | Leave a Comment
"Tom Hughes --- Gee, you're clearly quite intelligent. I bet you're in Mensa. The MAJORITY ..."
markinator Clarification on the now viral Wisconsin ..."
"Source in the Constitution?Again, you have not replied to my argument about any "except for" ..."
Alonzo Donald Trump vowed to destroy the ..."
"Tom, I gave explicit instances when getting ID and registering to vote might be difficult. ..."
Annerdr Clarification on the now viral Wisconsin ..."
"You do realise that the only person we've seen throw the word nazi around is ..."
TheMarsCydonia The Danthropology blog is moving on
Browse Our Archives
get the latest from
Nonreligious
Sign up for our newsletter
POPULAR AT PATHEOS Nonreligious
1

Justice Ginsburg, a court filing, a legal symposium...
As you would expect, the death of Justice Ruth Bader Ginsburg late...
view all Nonreligious blogs
What Are Your Thoughts?leave a comment
Copyright 2008-2020, Patheos. All rights reserved.