Trump is the end of American progress

Trump is the end of American progress November 9, 2016 Dan Arel

As I write this, Donald Trump is 6 electoral votes away from winning the 2016 presidential election. This is not a news post, this is a polemic of some kind.

Trump’s win is an end to progress in America. In a sense, it’s an end of America. I don’t mean to sound hyperbolic, but hear me out.

Come January, Trump will be president, and the Republicans will hold the House, Senate, and will confirm an ultra-conservative Supreme Court Justice.

We can expect same-sex marriage to be overturned.

Any sense of affordable healthcare is dead.

We can expect abortion rights to be ended.

We can expect unions to be destroyed.

We can expect LGBTQ protection rights to be destroyed.

Muslims will be chased out of the country.

Refugees turned away at the border.

Immigration will grind to a halt.

The America we know is gone. We elected a racist, bigoted white supremacist.

Jill Stein is not to blame.

Gary Johnson is not to blame.

Racist, nationalists who showed up and voted for Trump are to blame.

Clinton’s poor campaign that didn’t inspire voters is to blame.

Reactionary voters who read headlines about emails, but not the story are to blame.

Now we fight. We must unite in full rejection of Trumpism.

We must unite and stand in solidarity with every minority group that will suffer under Trump and stand firm that we will not allow it.

But as we do that, we are likely witnessing the end of America as we know it. We must now rebuild. 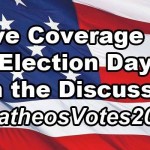 November 9, 2016 Fascist Donald Trump wins the 2016 Presidential Election
Recent Comments
0 | Leave a Comment
"Tom Hughes --- Gee, you're clearly quite intelligent. I bet you're in Mensa. The MAJORITY ..."
markinator Clarification on the now viral Wisconsin ..."
"Source in the Constitution?Again, you have not replied to my argument about any "except for" ..."
Alonzo Donald Trump vowed to destroy the ..."
"Tom, I gave explicit instances when getting ID and registering to vote might be difficult. ..."
Annerdr Clarification on the now viral Wisconsin ..."
"You do realise that the only person we've seen throw the word nazi around is ..."
TheMarsCydonia The Danthropology blog is moving on
Browse Our Archives
get the latest from
Nonreligious
Sign up for our newsletter
POPULAR AT PATHEOS Nonreligious
1