What does it mean to say that Donald Trump is ‘Not My President’?

What does it mean to say that Donald Trump is ‘Not My President’? November 10, 2016 Dan Arel

The meme above is one of many making its way around the internet over the last few days. It seems to be causing some confusion, so I thought I would try to explain to those who don’t understand it. This is what I wrote on Facebook last night:

In what is a 2004 throwback, “Not My President” is back in action and it’s already catching shit from ill-informed conservatives and neoliberals as being anti-democracy.

Not My President is not a claim that Trump did not win. It is not an attempt to invalidate the fact that he is THE president. He will be, there is no doubt.

It is, however, a repudiation of his values. His ideology. It says that he does not in any way represent us, the majority of the US that actually voted against him (no matter how small the difference).

It says his presidency, his government, is our enemy. We will fight them every step of the way as they fight to remove the rights of our citizens or attack foreign countries.

Trump is not my president because his version of this country is not one I want to be a part of. It is one I will fight to stop, to overthrow. The history I am writing for this country in one in which the American people stood up to fascism and never backed down.

Donald Trump is going to be the president of the United States, but he doesn’t represent me, and he is Not My President. 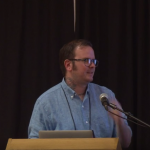 November 10, 2016 I am coming to San Francisco and Berkeley to discuss secular activism!
Recent Comments
0 | Leave a Comment
"Tom Hughes --- Gee, you're clearly quite intelligent. I bet you're in Mensa. The MAJORITY ..."
markinator Clarification on the now viral Wisconsin ..."
"Source in the Constitution?Again, you have not replied to my argument about any "except for" ..."
Alonzo Donald Trump vowed to destroy the ..."
"Tom, I gave explicit instances when getting ID and registering to vote might be difficult. ..."
Annerdr Clarification on the now viral Wisconsin ..."
"You do realise that the only person we've seen throw the word nazi around is ..."
TheMarsCydonia The Danthropology blog is moving on
Browse Our Archives
get the latest from
Nonreligious
Sign up for our newsletter
POPULAR AT PATHEOS Nonreligious
1