After harassing a transgender student, Milo Yiannopoulos deserves to be kicked off campuses

After harassing a transgender student, Milo Yiannopoulos deserves to be kicked off campuses December 20, 2016 Dan Arel

I don’t often disagree with Jerry Coyne, but on this issue of “free speech,” I must.

Coyne is upset that students at the University of Colorado are gathering signatures to rescind an invitation to Milo Yiannopoulos, the controversial Breitbart writer, to speak on campus.

The petition, which is being organized by Charles Wofford, says:

“It is, I think, the university’s responsibility to defend its students from being literally attacked, and physical harm isn’t the only kind of harm out there. The university ought to be a safe space to learn and be who you are without fear of reprisal.”

He is correct. Many will argue that a campus is not a “safe space,” but they are wrong to do so. While no topic should be shielded from discussion or criticism, students themselves should be free of harassment and both physical and verbal attacks aginst themselves.

This is exactly what Yiannopoulos does. At the University of Wisconsin-Milwaukee, he attacked a student, Adelaide Kramer, verbally, posting her photo and using her name during his speech.

Yiannopoulos said in his talk that Kramer “forced his way into women’s locker rooms.”

And while a photo of Kramer was projected on stage for audience ridicule, he said that:

“He got into the women’s room the way liberals always operate, using the government and the courts to weasel their way where they don’t belong.” Title IX “is used to put men into women’s bathrooms. I have known some passing trannies in my life. Trannies . . . you’re not allowed to say that. I’ve known some passing trannies, which is to say transgender people who pass as the gender they would like to be considered.”

Universities have an obligation to defend their students from such attacks. They are there to learn, not be attacked over their gender, sexual identity, race, etc.

By allowing Yiannopoulos to speak, they are welcoming these kinds of attacks.

Yiannopoulos has a right to say what he pleases, but universities and no one else has an obligation to give him such a platform.

Coyne concludes after all of this that:

He’s already been invited, so yes, disinviting him is infringing on his right to freedom of speech. These Illiberal Leftists (is that better than “Regressive Leftists”?) have no idea what freedom of speech is really about.

Sorry, Jerry, but you’re more than wrong here. This doesn’t infringe on a single right he has. You’re entitled to your speech, you’re not entitled to someone else’s platform.

Update: Coyne has taken offense to my calling him out for defending Milo’s right to speak on campus. He took to his blog to accuse me of calling for a “permanent of irrevocable ban” on Milo.

I just re-read this post and don’t find the word “ban” or “permanent” anywhere. When Coyne asked me on Facebook if I was calling for that, I said no.

This did not stop him from blogging that I did. After calling him out for his dishonesty, he just blocked me instead of addressing it. The irony here is probably lost… 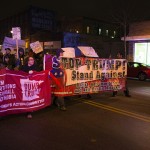 December 19, 2016
The secular resistance to Donald Trump must begin now
Next Post

December 20, 2016 Ken Ham is 'taking back the rainbow' from the LGBTQ community by lighting the Ark Encounter
Recent Comments
0 | Leave a Comment
"Tom Hughes --- Gee, you're clearly quite intelligent. I bet you're in Mensa. The MAJORITY ..."
markinator Clarification on the now viral Wisconsin ..."
"Source in the Constitution?Again, you have not replied to my argument about any "except for" ..."
Alonzo Donald Trump vowed to destroy the ..."
"Tom, I gave explicit instances when getting ID and registering to vote might be difficult. ..."
Annerdr Clarification on the now viral Wisconsin ..."
"You do realise that the only person we've seen throw the word nazi around is ..."
TheMarsCydonia The Danthropology blog is moving on
Browse Our Archives
get the latest from
Nonreligious
Sign up for our newsletter
POPULAR AT PATHEOS Nonreligious
1