Arizona school teacher resigns after tweeting that immigrants should be killed 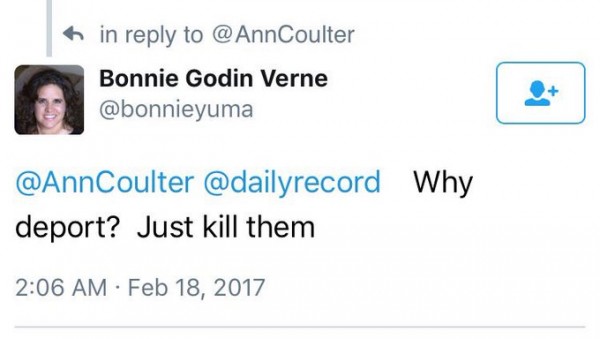 Arizona teacher Bonnie Verne resigned this week from the Pardes Jewish Day School in Scottsdale after suggesting online that immigrants should not be deported but instead killed.

“Why deport? Just kill them,” Verne responded to a tweet by Ann Coulter. “Or we can just put a bullet in their head immediately,” she added.

Her Twitter has since gone private and the tweets deleted, but not before screenshots had been taken.

Verne had worked at the school for 12 years as a third-grade teacher before resigning.

The school said they supported her freedom of expression, however, they felt the comments she made “have no place in our school.”

“[Verne] deeply regrets having in recent days made comments using her personal social media account that were inappropriate, offensive and unbefitting of a Pardes teacher,” a statement from the school reads.

Let’s see the free speech warriors defend this one.

March 1, 2017 My sister had her letter read to the Senate today in support of Planned Parenthood
Recent Comments
0 | Leave a Comment
"Tom Hughes --- Gee, you're clearly quite intelligent. I bet you're in Mensa. The MAJORITY ..."
markinator Clarification on the now viral Wisconsin ..."
"Source in the Constitution?Again, you have not replied to my argument about any "except for" ..."
Alonzo Donald Trump vowed to destroy the ..."
"Tom, I gave explicit instances when getting ID and registering to vote might be difficult. ..."
Annerdr Clarification on the now viral Wisconsin ..."
"You do realise that the only person we've seen throw the word nazi around is ..."
TheMarsCydonia The Danthropology blog is moving on
Browse Our Archives
get the latest from
Nonreligious
Sign up for our newsletter
POPULAR AT PATHEOS Nonreligious
1