A lot has been written on Patheos this week about NH lawmaker Brandon Phinney.

Phinney is being praised for writing this in the local paper:

In an age of information, scientific progress and exploration and the understanding of the workings of our world, it is difficult and to be frank, rather foolish, to hold onto archaic beliefs that deny reality.

That sounds like a guy on our team and a Republican! Wow, you don’t see that every day. Until you learn more about him and realize he is also a mega-racist.

Now, many of you may not know this, but I grew up in Rochester, NH, the same city Phinney is in. While I am a bit older, he knows my brother.

Late last year, I engaged in a conversation with Phinney on my brother’s Facebook wall.

The topic was part political commentary, part trolling on my brother’s behalf, yet the topic took off and white people, as they usually are, got offended when they had to check their privilege.

Phinney though, felt white people are the real victims here and referred numerous times to people of color as the real racists.

You can see the conversation here, though Phinney, once someone mentioned that he was running for office deleted his comments.

I did grab this screenshot: 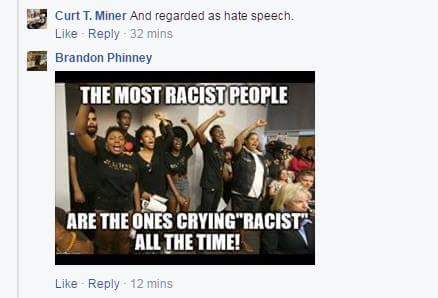 Now, I understand this isn’t the most compelling evidence of racism. Phinney was smart to delete all of his comments quickly (or at least block me so I can’t see them), but the point here isn’t to start a witch hunt against him.

He has no business being an elected official with his racist views, yet, at the very least, we can cancel this assholes 15-min and send him and his backwoods ideals back where they belong.

February 23, 2017 A California City Council voted to impeach President Donald Trump
Recent Comments
0 | Leave a Comment
Browse Our Archives
get the latest from
Nonreligious
Sign up for our newsletter
POPULAR AT PATHEOS Nonreligious
1