Betsy DeVos said she is happy to work herself out of a job by closing the Department of Education February 17, 2017 Dan Arel

In her first week as the Secretary of Education, Betsy DeVos has already promised to wreak havoc on the Department of Education.

DeVos has promised to audit all programs, saying she believes the department can do a lot less.

In an interview with the Big Show radio program on Tuesday, DeVos said that although she can “guarantee there are things the department has been doing that are probably not necessary or important for a federal agency to do.”

“We’ll be examining and auditing, and reviewing all of the programs of the department and really figuring out what is the core mission and how can the federal department of education really support and enhance the role of the departments in the states. Because really when it comes down to it, education and the provision of education is really a state and local responsibility to a large extent. So these sorts of things will be part of our focus in the coming weeks and I think we’ll have some good robust conversations about that.”

She then said in an interview later with Axios that she is okay with seeing the entire department close.

Her plan is in line with Trump’s campaign promise to cut the department’s spending and influence, if not simply cut the entire department.

Just as outrageous as closing the department, DeVos noted that while the department once tacked important civil right’s issues, Devos said she “can’t think of any now,” that need addressing.

As ThinkProgress noted, that statement “may be cause for concern for educators, parents, and advocates for disadvantaged students, since it indicates DeVos could propose making cuts to the Office for Civil Rights.” They continued by explaining the “office handles complaints about Title IX violations, which includes women’s access to sports and the investigation of campus rape, the rights of students with disabilities, and racially disparate student discipline.”

DeVos is highly unqualified for this job, her staff choices will likely be as unqualified as she is, and in the end, it will be American students who pay the ultimate price for her inadequacy.

Education activists will need to find a way to oppose and resist any and all changes DeVos and her team put forward. 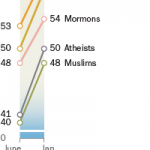 February 15, 2017
New poll suggests American's feelings towards atheists and Muslims are getting better
Next Post

February 19, 2017 Bill Maher shows us why we can't platform fascists
Recent Comments
0 | Leave a Comment
"Tom Hughes --- Gee, you're clearly quite intelligent. I bet you're in Mensa. The MAJORITY ..."
markinator Clarification on the now viral Wisconsin ..."
"Source in the Constitution?Again, you have not replied to my argument about any "except for" ..."
Alonzo Donald Trump vowed to destroy the ..."
"Tom, I gave explicit instances when getting ID and registering to vote might be difficult. ..."
Annerdr Clarification on the now viral Wisconsin ..."
"You do realise that the only person we've seen throw the word nazi around is ..."
TheMarsCydonia The Danthropology blog is moving on
Browse Our Archives
get the latest from
Nonreligious
Sign up for our newsletter
POPULAR AT PATHEOS Nonreligious
1