Atheists in America are getting a bit more love this year it seems.

According to a new study released by Pew Research, atheists, and even Muslims, are becoming more accepted by mainstream society. The study asked how each participant felt towards each religious group, using warm or cold as their gauge. The higher the number, the warmer one’s feelings towards a particular religious group.

Now, the updated study suggests atheists have jumped to 50 points, Muslims to 48, and Jews and Catholics both jumped 4 points.

Americans certainly are not in love with atheists and Muslims, but the jump in points certainly shows that things are turning around.

The jump in warmer feelings toward Muslims is actually rather shocking given the last few years of political campaigning vilifying them and the recent Muslim ban issued by Donald Trump’s administration.

As atheism becomes more normalized, I think the numbers will continue to rise, maybe only slightly, but I think the overall feelings towards nonbelievers will simply level out.

Age seems to play a major factor in this thinking as well. Among all age groups over 30, atheists and Muslims rank among the lowest. 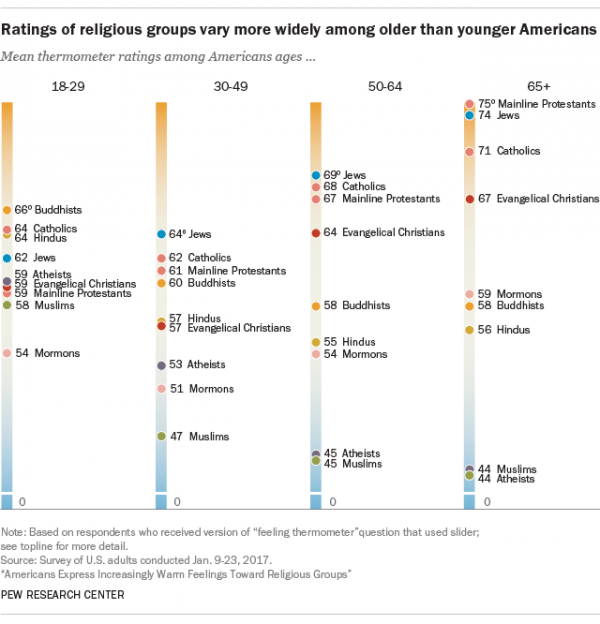 Yet, in the 30-49 age group, atheists are still ranked above Muslims and interestingly enough Mormons.

However, the biggest change is in the 19-29 group. This group prefers Buddhists with 66 points, brings in atheists at 59 points, ranking them fourth, and drops Mormons all the way down to 54 points, putting them under Muslims who came in at 58, making them just about equal with mainstream Christians.

As this age group rises through the years, I think this is the kind of trend we will see. Likely, in the next decade or so, most religious groups would likely begin to equal out.

One thing is certain, the poll gives hope that the stranglehold religion holds on American society is weakening and as the older generations move out, the younger ones are holding many different feelings about religious belief.

February 17, 2017 Betsy DeVos said she is happy to work herself out of a job by closing the Department of Education
Recent Comments
0 | Leave a Comment
Browse Our Archives
get the latest from
Nonreligious
Sign up for our newsletter
POPULAR AT PATHEOS Nonreligious
1