Pulling Back the Curtain

The previous post in the Observatory, “On Presuppositions“, discussed a few of the many ways in which bias has been shown to affect our decisions. When we expect or believe something to be true, we very often act as if it is true, and disregard contradictory evidence.

Given these undeniable facts, what hope is left for us to know the truth? A cynical interpretation would be that science, the organized quest for truth, has ironically proven that science is hopeless, that every conclusion is too deeply tainted by the concluder’s presuppositions for us to put any confidence in it. And indeed, there are some people who feel this way. Creationists, for example, argue that the evidence does not decisively tell in favor of one worldview over another, that one’s interpretation rules supreme and that accepting the truth must always be an act of faith. (It is strange that people who claim to believe in absolute truth are so eager to promote this kind of epistemological nihilism.) Even some philosophers of science have jumped to this conclusion.

Must this gloomy conclusion be accepted? When the latest paper is published describing another way in which people deceive themselves, does this mean we have chipped away at our own rationality a little bit more? Not at all.

In fact, I would argue, these discoveries actually increase our rationality. When we are aware of the possibility of self-deception, we will know to take it into account in the future. What reduces our rationality is not being aware of ways we can be biased, but being unaware of it.

Consider an analogy. Imagine that NASA is designing a probe to explore the outer reaches of the solar system. Due to the finite speed of light, our ability to communicate with such a probe when it is far from home is necessarily limited. Any message the spacecraft sends, no matter how short, will take several hours to reach its home planet, and any command we send in reply will take just as long to return. If the probe encounters some critical problem, such as an asteroid drifting into its path, such a delay could be lethal. And so, NASA’s engineers lay out a bold plan: they design the craft to control itself, to respond autonomously to problems without human intervention. (The rovers Spirit and Opportunity currently exploring the surface of Mars use technology of this sort.) If it encounters an obstacle, for example, it will be able to fire its thrusters to maneuver around it, avoiding a collision.

Once the probe has performed such a maneuver, however, it must return to its original trajectory. In order to do this, it must take into precise account all the influences on its motion; to neglect even one could send it millions of miles off course. For example, solar heating of the probe’s sunward side will induce a slight radiation pressure as the absorbed energy is re-radiated into space. Though this effect is tiny, if not corrected for it can become multiplied over long distances until, by the end of its journey, the craft is far from where it should have been.

By hypothesis, this probe is autonomous. If its sensors are unable to detect the influence on its motion, it will never reach its destination. On the other hand, if it can detect this influence, it will be able to compensate for it by correctly applied thruster firings. The detection of such an effect would not mean that the probe was drifting hopelessly off course. On the contrary, it would mean that the probe now has removed one source of error and has that much greater a chance to successfully complete its mission.

Though the situation with human beings is more complex, the basic elements are the same. Once we become aware of a way we have been deceived, or a way we are liable to deceive ourselves, we can correct for it and will (hopefully) be more resistant to similar tricks in the future. The more you know, and in particular the more you know about yourself, the more resistant to the distorting effects of bias you are; the very fact of being alert to your own biases makes it easier to see and correct them.

This is what science is: a systematic way of correcting for human bias. It is not a perfect tool for doing this, just as no human endeavor is perfect, but by following its principles to guard against self-deception, we have a much better chance of uncovering the truth than we otherwise would. Before the Rosenhan study, the possibility was not acknowledged that people in mental hospitals might not be ill at all; now it is. More importantly, the fact that hospital staff and administrators did not consider that possibility did not prevent Rosenhan from considering it, and proving that they should take it seriously in the future.

Even unconscious bias, insidious as it is, can be conquered. Malcolm Gladwell’s book Blink, which discussed the Implicit Association Test results that seemed so disheartening, offers a ray of hope. It turns out that people who view images of popular, successful African-Americans, such as Olympic athletes, before the racial bias test did significantly better than people who did not:

But, believe it or not, if, before you take the IAT, I were to ask you to look over a series of pictures or articles about people like Martin Luther King or Nelson Mandela or Colin Powell, your reaction time would change. Suddenly it won’t seem so hard to associate positive things with black people. (p.97)

Though the book did not discuss the possibility, it is an obvious extension of these results to speculate that this effect could occur with other types of implicit bias as well. I would predict that people acquainted with examples of women excelling in business and science would be far less likely to link those traits with males in the IAT.

This result is actually quite heartening, because it shows that positive memes can easily overpower negative ones, if given the chance. It is hardly surprising that when people are only exposed to negative, prejudiced messages (regardless of where those messages are coming from), their behavior reflects this. However, when people are given both good and bad messages, it seems that the good defeats the bad.

This is another example of how being alert to our own biases makes it possible to defeat them. If this sort of priming is necessary to overcome unconscious bias, then we as a society will simply have to make sure that such priming is frequent and widespread.

Despite what creationists and other enemies of science would claim, human bias can be overcome. This is not to say that our methods of finding truth are infallible or that it will never affect our beliefs, but in the long run, bias does cancel out. After all, if our truth-finding methods were as hopelessly faulty as some would claim, why have they been so successful? Over the past several hundred years, we have experienced a spectacular increase in our ability to predict, control, and alter the natural world for our benefit. If science were just one set of preconceptions replacing another and had no progress in the absolute sense, it is difficult to see why this would occur. The only reasonable explanation is that there is a knowable world that exists independently of us, and that science does indeed give us a way to hone in on the principles that guide it.

March 8, 2006 That Monstrous Regiment
Recent Comments
0 | Leave a Comment
"I've long felt for-profit prisons to be an abomination in a free society. There should ..."
ORAXX Commonwealth, III.XIV: The Ultimate Indictment
"Dr. Everett Piper banned me from his Facebook page for simply correcting misinformation he had ..."
Joe Eshleman Why Christian Conservatives Are the Real ..."
"When I read the text of the meme saying 'When the Lord is ready for ..."
J-D Debunking Anti-Vaccine Memes, Part I
"God was perfectly ok with a quarter of infants dying before their first birthday, until ..."
RB Debunking Anti-Vaccine Memes, Part I
Browse Our Archives
get the latest updates from
Daylight Atheism
and the Patheos
Nonreligious
Channel
POPULAR AT PATHEOS Nonreligious
1 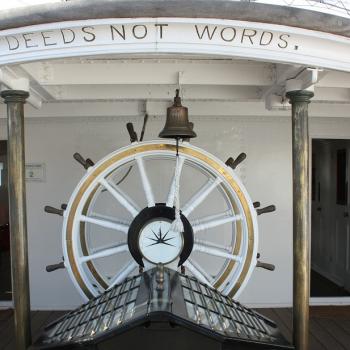