I don’t regularly read the New York Daily News, which could be generously described as a tabloid, but a story in the May 29 edition happened to catch my attention, and not in a good way. To the right is a scan of the page (click for larger version): 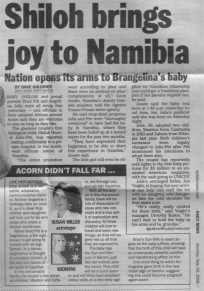 Just below a story on the birth of Brad Pitt and Angelina Jolie’s newborn daughter is an article by the paper’s astrology columnist, Susan Miller, confidently asserting what the girl’s personality characteristics will be based on the date and time of her birth. We are informed that her birth constellation, Gemini, is an “air sign” that will cause her to be “versatile, adaptable, communicative” and that since Jolie is also a Gemini, “mother and daughter will turn out to be very close and share a similar worldview”. Due to the influence of Mercury, the Sun and the Moon, the child “will be a quick learner and will likely have excellent verbal skills at a very early age”.

Astrology is a pseudoscience through and through, a superstition based on credulous notions of magical thinking. Putting an astrology column on the entertainment page, with comic strips and puzzles, is bad enough. But interweaving it with an actual news story, as if it were legitimate information that informed citizens should know about, is inexcusable. (This should not be taken to imply that the frenzied pursuit and harassment of celebrities by paparazzi is a legitimate journalistic endeavor in its own right. If the tabloids want to write a story worth reading, they could instead be discussing Angelina Jolie’s extensive humanitarian and charitable work on behalf of Third World nations.)

The inimitable Skeptico has already provided abundant evidence that astrology doesn’t work, so I will focus on providing some reasons why astrology doesn’t work. For one thing, astrologers speak as if the constellations we see were distinct and fixed objects in their own right, but nothing could be further from the truth. The stars that make up the constellations are of different types, different sizes, different ages, and different distances from each other and from Earth. The only reason they appear to fall into the patterns they do is because of the way they are superimposed from our planet’s vantage point. From a different location in the galaxy, they would seem to fall into a completely different pattern, or no pattern at all. In fact, this will happen: our Sun and our solar system are orbiting the center of the Milky Way galaxy, taking the Earth with them. Due to this motion, in a few tens of thousands of years, the night sky as seen from our planet will appear substantially different, and the current constellations will no longer exist.

And why, for that matter, should these arbitrary arrangements rather than others be significant? The constellations are, without a doubt, highly imaginative interpretations of certain stellar arrangements; they are hardly glaringly obvious patterns in the night sky apparent to all. If I decide that half the stars in Leo and half in Cancer can be put together into a new constellation that affects my life in different ways than either of those two, on what grounds could an astrologer say that this is incorrect? And what about other cultures who see very different constellations than our own?

There is no even vaguely plausible mechanism by which arbitrary arrangements of distant stars could influence the personality traits of human beings here on Earth, much less by which they could do so in such a consistent and predictable way. Vague “gravitational resonances” have sometimes been proposed as the explanation, but this cannot possibly work. For purposes of illustration, take the most massive star known to astronomers, the Pistol Star, which may have as much as 150 times the mass of the Sun. Take, also, the closest star system to Earth, Alpha Centauri, at a distance of about 4 light-years. (One solar mass is about 2 x 1030 kilograms; one light-year is approximately 9.4 x 1015 meters.) Plug these figures into Newton’s law of universal gravitation to determine the gravitational force that a star the size of the Pistol Star at the distance of Alpha Centauri would exert on a 100-kilogram person on Earth:

This yields a result of 1.4 x 10-9 newtons of force, or in other words, about a billionth of a newton. By comparison, a 1-kilogram object, such as an apple, at a distance of 1 meter from a person exerts a gravitational force of about 6.7 x 10-9 newtons on that person – about five times as much. Another 100-kilogram person standing one meter from you exerts on you a gravitational force of 6.7 x 10-7 newtons, a hundred times as strong as even this example, which is generously slanted to favor the claims of astrology. In reality, the stars making up the constellations are far less massive and far more distant than the numbers used here. Any gravitational force they could exert on us would be utterly negligible and completely swamped by the far more powerful (though still insignificantly tiny) gravitational attractions of nearby objects.

Recognizing that gravity is a non-starter as an explanation, most astrologers simply wave their hands about conveniently undetectable “energies”, deploy extremely garbled understandings of quantum physics, or make naked appeals to magic with principles such as “as above, so below”. These explanations are nothing but modern versions of the ancient and superstitious notion of sympathetic magic, where when two objects are alike or connected in some way, one is assumed to influence the other. (Other classic examples of pseudoscience, such as homeopathy, rely on the same principle.) And while it is true, as astrologers say, that just because we have not yet discovered evidence for such a force does not prove that it does not exist, to claim astrology is valid on this basis is a fallacious attempt at shifting the burden of proof. If astrologers want their beliefs to be accepted as truthful, they should and must provide real evidence, not simply make excuses for why the evidence has not been discovered yet. Whatever the claimed principle is by which astrology works – gravitational resonances, quantum entanglement, synchronicity, harmonic convergences, or just plain magic – can any astrologer demonstrate its existence and efficacy in a well-controlled scientific experiment?

What would have been genuinely impressive would be if astrologers had predicted the existence of large, planetary-sized Kuiper Belt bodies, such as Sedna, Quaoar or the recently discovered 2003 UB313 (alias “Xena”), by recognizing that there were hidden influences on people’s charts not accounted for by known planets. Of course, they did no such thing, and now that genuine scientists have established the existence of these bodies, astrologers are only now eagerly speculating about their possible influences.

Finally, it should not be overlooked that most horoscopes, including Miller’s, include a generous proportion of statements so vague and general as to be nearly impossible to disprove, i.e., Barnum statements. (What person would not “love to travel and learn new things”?) Human confirmation bias does the rest, leading individuals to pick out the elements that seem most applicable to their situation and overlook the rest. Should a horoscope contain some seemingly devastatingly accurate information – and given the millions of different people who read their horoscopes every day, it would be more surprising if this never happened – without a doubt it will be remembered by the recipient; but the far larger number of horoscopes that contain no such relevant information are forgotten. (A similar phenomenon explains religious testimonies supporting the efficacy of prayer.) But in a controlled test where such common errors of reasoning cannot be brought into play, astrology, like other popular delusions, inevitably fails to prove that it is of worth.

June 7, 2006 Why Do We Care?
Recent Comments
0 | Leave a Comment
"I can at least attempt to give you a start.The Berkeley Archive is here. You ..."
abb3w Will ‘Nones’ Bring a Progressive Future?
"Well, at least y'all cain't blame Me fer smitin' y'all with global climate disruption, eh. ..."
Gord O'Mitey America’s Climate Exodus Is Just Beginning
"Is there some secular counterpart of religious conservatism? Like being "pro-family", anti-abortion, anti-homosexuality, etc. I ..."
Loren Petrich Will ‘Nones’ Bring a Progressive Future?
"A few months after Hurricane Katrina struck New Orleans, I went to Turkey. Among other ..."
Justine Valinotti America’s Climate Exodus Is Just Beginning
Browse Our Archives
get the latest from
Daylight Atheism
Sign up for our newsletter
POPULAR AT PATHEOS Nonreligious
1

Will Christianity Ever Accept Homosexuals?
Pope Francis may suggest that homosexuals have a right to be a...

Serena's Serenity - Sad Pianos & No Birth...
There's a big difference between the two books I am reviewing right...
view all Nonreligious blogs
What Are Your Thoughts?leave a comment
Copyright 2008-2020, Patheos. All rights reserved.