A Call for Truth in Advertising Laws

A Call for Truth in Advertising Laws August 25, 2006 Adam Lee

I was in New York City the other week, near Penn Station, when I was accosted by a well-dressed man in a business suit attempting to hand out fliers to passers-by. I did not take one, but inside the train station, I noticed one cast aside and lying on the ground. Out of curiosity, this time I picked it up and read it. It turned out to be promoting a revival meeting to be held in Madison Square Garden that weekend by the Korean evangelist Jaerock Lee, sponsored by a host of local churches. Below is a scan of the front and back sides of the flier: 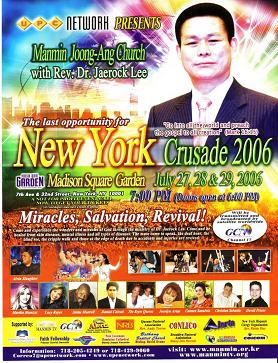 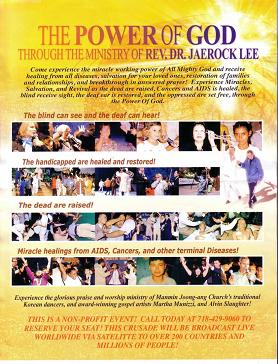 However, that phrase was not the one that provoked my ire the most. Rather, as readers can see for themselves, the front side of the flier makes the following claim:

Come and experience the wonders and miracles of God through the ministry of Dr. Jaerock Lee. Come and be healed from skin diseases, mental illness and all types of diseases. The mute come to speak, the deaf hear, the blind see, the cripple [sic] walk and those at the edge of death due to accidents and injuries are revived.

and, not to be outdone, the back side elaborated on these promises at greater length:

Call me a skeptic if you must, but I highly doubt that anyone was raised from the dead, at this revival meeting or any other. A photo of people getting up off the ground looking woozy does not establish otherwise. Make no mistake, if Jaerock Lee really can cure AIDS, regenerate severed spinal cords, or heal retinas destroyed by glaucoma or macular degeneration, I would welcome him to demonstrate his powers under the oversight of qualified, independent physicians – but I do not think he can do any of those things. I will, in fact, go further and assert that no Christian evangelist in history has ever done any of the things Lee’s flier claims he can do. The evidence for such an extraordinary claim simply does not exist. (Interestingly, Lee’s “miracles” have been endorsed by none other than notorious creationist William Dembski.)

Why are truth in advertising laws not being applied here? If some pharmaceutical company or herbal supplement manufacturer put out an ad falsely claiming that its products could cure blindness, AIDS and terminal cancer, the FDA and other government agencies would come down on them like a ton of bricks. Why, then, are religious evangelists allowed to get away with making exactly the same claims without offering a shred of evidence? The right to free speech does not extend to allowing a business selling a product to make extravagant unproven claims about the efficacy of that product.

In the end, it boils down to a public-relations issue: government regulatory agencies sue businesses making false claims because they are confident of prevailing in the court of public opinion, but they fear to touch religious hucksters because of the backlash that would inevitably ensue. Make no mistake, Christian evangelists have raised the skill of depicting themselves as the poor, unjustly persecuted minority to an art form, and no doubt an angry horde of true believers would storm the offices of any agency that had the courage to call Lee’s fabricated claims what they are. We badly need a truly secular government, one that does not give a pass to false claims just because they are made in the name of religion; but more importantly, we need an educated populace that will not credulously accept ridiculous claims just because they come tagged with the word God.

Interestingly, it seems Jaerock Lee is a controversial figure even among his fellow Christians. Sites such as this one document assertions made by him that, to put it mildly, betray an exaggerated sense of self-worth. To put it less mildly, these claims would be considered delusional if not for our society’s tendency to consider any belief emanating from religion as above reproach. It seems likely that Lee’s wild and grandiose stories about healing terminal illnesses, raising the dead and so on stem from the same psychological condition that makes him think of himself as virtually equal with God. Regrettably, the fact that millions of people hold very similar beliefs causes them to hail him as a prophet and visionary, rather than encouraging him to seek the psychological help he plainly needs.

August 29, 2006 On Pushing Back
Recent Comments
0 | Leave a Comment
Browse Our Archives
get the latest updates from
Daylight Atheism
and the Patheos
Nonreligious
Channel
POPULAR AT PATHEOS Nonreligious
1