Last month, while I was on vacation in Puerto Rico, I had a chance to visit the great radio observatory at Arecibo. That was one of the highlights of my trip, but there was another.

Puerto Rico has the only tropical rainforest in the United States national park system. On the northeast coast of the islands, at the foot of the Luquillo Mountains, is the 28,000-acre preserve of El Yunque National Forest. Set aside in 1876 by the Spanish king Alfonso XII, El Yunque is one of the oldest nature reserves in the Western Hemisphere.

There wasn’t the chance to do much hiking, but even the paved roads in the park cut through deep jungle. The walkway leading into El Portal, the visitors’ center, was elevated to treetop height, so visitors on their way in were at eye level with the canopy of the rainforest. The sunlight streaming down through the trees gave a gloriously beautiful cast to it all:

A view from the walkway into the treetops: 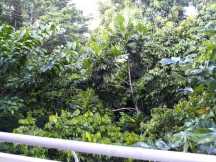 I did my best, but I doubt any camera could capture the most overwhelming impression of the forest: the sheer sense of rich, exuberant life, unbounded in its creativity. Every ecological niche was filled by an exultant diversity of species, living side by side in a dense, thriving tangle abounding with interaction and competition. Everywhere you looked, there were whole ecological communities in miniature – in the steaming light of the trees’ high branches, in the cool, mossy damp at their feet, in the crumbling remnants of fallen logs – like a fractal web of life, revealing more scales of complexity the deeper your search goes. In all of Earth’s multibillion-year history, the tropical rainforest is likely the richest and most diverse ecosystem that has ever existed. Standing beneath the tall trees’ cathedral light, it wasn’t at all difficult to believe that. 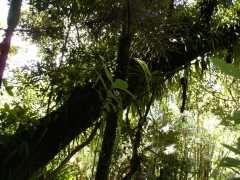 Of course, not all the rainforest’s countless interactions are harmonious. Despite the environment’s richness – or more accurately, because of its richness – life in El Yunque is a constant struggle, a silent battle being waged on every scale of space and time. Individuals of different species, and of the same species, are always fiercely thrusting each other aside, striving for space, for light, for nutrients, for water. In the midday silence of the forest, it almost seemed possible to hear natural selection: a quiet, relentless ratcheting pressure on every side, like the grinding of interlocking gears. In the cauldron of the forest, gene frequencies are shifting, mutations arising, and new innovations being born in the great evolutionary chess game of move and countermove. Sadly, it’s a conflict that many of the native species are losing: some of the most common plant species to be seen in El Yunque, including bamboo and palm trees, are alien interlopers, introduced either deliberately or accidentally and now thriving at the expense of the natives.

There was one feature of my trip there that I treasure above all others. While we were at the visitors’ center, the thing that I had been hoping for happened: it started to rain. (Admittedly, not a rare event in a place that gets 240 inches of rain each year.) The visitors’ center was like a long passageway with a high, vaulted ceiling: open to the air, but with a roof, so there was no need to get rained on. However, I wanted to be rained on.

I stood on an outlook overseeing the endless green of the forest and the shimmering blue of the ocean in the distance beyond, and let the rain come. It was a gentle shower, not a hammering deluge: the kind of rainfall that comes on sunny spring days and soon passes by, leaving the world washed in glistening brightness. In the humid, earthy heat of the forest, it was welcoming, warm like lifeblood. As the rain fell on me, I reached out and brushed the broad, dripping leaf of a tree growing within reach of the balcony, and thought of the unbroken chain of generations that united us both with our long-gone common ancestor.

It wasn’t long before the rain cleared and the sun returned. But the memory of that shower is still with me; even now, I know, I carry some of those molecules of water in my skin. And as far as I’m concerned, the priests in their dusty churches can keep their silly, self-important dabblings and splashings. Let them persist in their delusion that muttering archaic words over a basin of water makes it specially holy. I’ve stood beneath the sweet sacred rain of El Yunque, and I think it was a finer baptism than any that human beings have yet invented.

And yet, I think I understand those believers a little better now. I think what I felt was the origin of the religious doctrine of immanence, the belief that God’s spirit imbues the things of the natural world. But I think the theologians who invented this concept have misconstrued its origin. Before an awe-inspiring natural landscape, we imagine that we feel a vast love surrounding us – and, in fact, we do. But it’s not God’s love surrounding us from outside, as many religious believers would have it. What it is, instead, is our own love for the world, projected outward. It’s the rapture of being alive, of realizing our true depth of interconnection and solidarity with all living beings, that priests and churches try to recapture with ritual and ceremony. But their efforts are, at best, a pale shadow of the real thing.

If more people knew what this feeling really is and what really causes it, we might be able to foster a true sense of human spirituality: one that captures what is best in the religious impulse, without tying it to the barren earth of ancient myth and superstition. My brief time beneath the living green of El Yunque persuades me that it is possible. I only wonder if enough people can be brought to the same realization while there are still places like this left.