As you can see from this picture, the building where I live has no thirteenth floor: 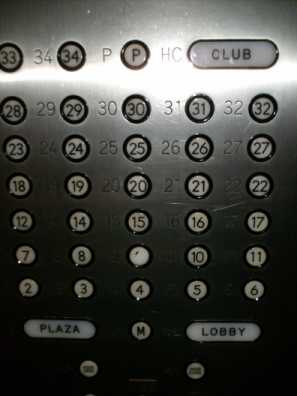 But of course, what this picture depicts is a mathematical impossibility. My building does have a thirteenth floor; it’s just that it’s mislabeled as the fourteenth floor, with all the floors above it similarly mislabeled by one.

This may be a small thing, but every time I step into the elevator, it’s a jarring reminder of how superstitious beliefs still permeate our society. I can see the logic in, say, a casino mislabeling its thirteenth floor – after all, that business makes money primarily by catering to irrational people. But an apartment building, really? I live in a modern high rise in a well-to-do section of New York, and I can assure my landlords that they would not have difficulty finding people willing to live on the 13th floor.

Numerology and number phobia may be among the oldest of superstitions. Ironically, the specific numbers that are considered “unlucky” vary from culture to culture – in Western societies it’s 13 (ironically, Indians consider 13 to be a lucky number), while in Eastern cultures, 4 is usually thought of as unlucky, since it is pronounced similarly to the word for “death”. 11 is unlucky in Italy, for a similar reason: the Roman numeral “XVII” can be rearranged to spell “VIXI”, which means “I lived”. 666, a very unlucky number indeed in Christianity, is lucky in many Eastern cultures. 7 is often considered lucky in the West and 8 in the East, but both of these are unlucky to Buddhists.

The usual accompaniment of unlucky-number superstition is numerology, which can be found among groups from September 11 conspiracy theorists to Jewish devotees of the Kabbalah (who call the practice gematria). All devotees of the practice use the same technique: assigning number values to letters and words, then putting those numbers through an arbitrary series of mathematical transformations until they arrive at some number arbitrarily deemed “significant”. A related method is to sort through huge numbers of numerical facts, looking for a number which several of those facts share in common, and assuming that those facts must also be connected.

Since there are literally no rules to this process, and since there are vast pools of numerical data to draw from, it’s no surprise that devotees of this method can arrive at whatever numbers they deem to be significant. But the significance is not in the numbers themselves. Like seeing patterns in clouds, the significance is imposed on the numbers by the mind of the observer. This can even be done with apparent mathematical rigor, as in this column from Jane Bryant Quinn:

David Leinweber, an expert in quantitative investment, satirized the “science” of prediction by sifting through numbers to see how he could have forecast the performance of the U.S. stock market from 1981 through 1993. He combined the total volume of butter produced each year in Bangladesh with the number of sheep in the U.S. and a few other variables, to produce a formula that forecast the past with 99 percent accuracy.

If precise, quantitative formulas can be so easily exploited to find seeming significance in patternless numerical noise, it’s no surprise that the far less rigorous devotees of numerology can do the same. The mathematician John Allen Paulos, in his recent book Irreligion, has an example of how easily these spurious correlations can be concocted:

Think of any four numbers associated with yourself (your height or weight, the number of children you have, your birthday or anniversary, whatever) and label them X, Y, Z and W. Now consider various products and powers of these numbers. Specifically consider the expression Xa Yb Zc Wd, where the exponents a, b, c and d range over the values 0, 1, 2, 3, 4, 5, 1/2, 1/3, 1/4, or the negatives of these numbers.

…Among all these values, there will likely be several that equal, to at least a couple of decimal places, universal constants such as the speed of light, the gravitational constant, Planck’s constant, the fine structure constant, the boiling point of carbon, and so on. (p.23)

The astronomer Cornelis de Jager, who came up with this formula, was able to use it to prove that there is a deep connection between the laws of the cosmos and his bicycle: the square of his bike’s pedal diameter, multiplied by the square root of the product of the diameters of his bell and light, was 1,836 – the same as the ratio of the mass of a proton to the mass of an electron. A shocking cosmic kismet? Proof of some grander and deeper significance to the manufacturing of Dutch bicycles? Rather, like all numerology, it is simply an example of the law of truly large numbers: although the odds of one particular coincidence are small, given enough data, the odds that some coincidence will occur are very good indeed.

April 8, 2008 Theocracy Watch XIII: "You Have No Right to Be Here"
Recent Comments
0 | Leave a Comment
Browse Our Archives
get the latest from
Daylight Atheism
Sign up for our newsletter
POPULAR AT PATHEOS Nonreligious
1