In Which I Am Attacked by a U.S. Political Party

This just keeps getting better and better.

Earlier this month, I wrote about the Senate campaign of Elizabeth Dole and how it was attempting to stir up anti-atheist bigotry to use against her Democratic challenger, Kay Hagan. Now, the national Republican Party has joined in, and once again, Daylight Atheism is a part of the controversy. 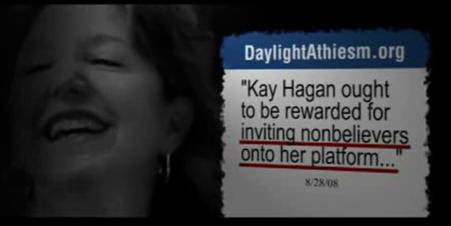 Reader Brian Westley informs me of this new web ad by the National Republican Senatorial Committee, titled “Godless”. In their most brazen attempt yet to incite hate, the ad quotes representatives of atheist political groups who’ve appeared on TV, then again cites Kay Hagan’s attendance at a fundraiser held by Wendy and Woody Kaminer of the Secular Coalition for America. And, yes, Daylight Atheism is once again cited in the video (at about the 1:40 mark) for my dreaded statement that “Kay Hagan ought to be rewarded for inviting nonbelievers onto her platform”.

I continue to be disappointed by the lackluster quality of these smear ads. The melodramatic piano music in the background is way over the top. Also, the NRSC doesn’t appear to have a copyeditor who knows how to spell “atheism”. And when it comes to the scary, scary goals of the atheist movement, they can only think of three: removing “under God” from the Pledge of Allegiance, removing “In God We Trust” from the currency, and no longer designating Christmas an official federal holiday. Really? That’s the worst they could come up with? Anti-atheist bigotry is usually much more inventive than this. No claims that atheists want to ban prayer from all public schools, or outlaw parents’ teaching their children about God? No wild-eyed assertions about how the Evil Atheist Conspiracy will send jackbooted thugs to break down little old ladies’ doors and take away their Bibles? Frankly, I could make a better attack ad against me.

But what this ad does show is that the Republican party is the party of theocracy, and proud of it. The worst innuendo they could come up with is a GAMPAC spokesman’s statement that atheists have no real representation in Congress, but “we fully intend to change that”; and my claim that Kay Hagan deserves praise for being willing to meet with atheists and consider our concerns. In their eyes, these are crimes, and atheists should be condemned and reviled merely for seeking political representation. Kay Hagan has made no statement to the effect that she’ll support any part of the atheist political agenda (I have no illusions about that) – in fact, she’s an elder of the Presbyterian church – but that hasn’t stopped the Republicans from targeting her in this smear campaign. They want to make it so that politicians are afraid even to listen to us.

With this ad campaign, the Republican party has clearly stated that not only will they not represent the interests of nonbelievers, they will actively stir up hate against us at every opportunity and use demonization as a tool to win votes. Not just the Dole campaign, but the entire party is complicit in this. Our country is in the midst of an economic crisis not seen since the Great Depression; thousands of people are losing their jobs; our health-care system is crippled, our infrastructure is collapsing, we are still utterly dependent on imported oil, and we are still pouring blood and treasure down the sinkhole of an unnecessary war – but the only thing the Republicans have to offer is crying, “Atheist!” Their campaign strategy appeals to the worst in people rather than the best.

America stands at an unprecedented crossroads, and the serious decisions about our country’s future can no longer be put off. The decisions we make in the next few years, for better or for worse, will shape our national destiny for decades, possibly longer. But even now, the only thing the Republican party wants to do is hurl epithets and crawl around in the mud. When the dilemmas we face demand national consensus, still the only thing they want to do is to foment hate and division. That policy is how we got into this mess in the first place!

This November, Americans have a chance to decisively reject this know-nothingism and show that we’re ready to start taking this country’s future seriously. This ad shows what’s at stake, though not in the way its makers intended. The Republican party, the party of bigotry and theocracy, is already on the ropes, and their electoral fortunes this year are dim. Let us do all that we can to make their defeat as crushing as possible, and show that America is ready to leave the phony controversies of the culture wars behind and start confronting the issues that genuinely matter to people’s lives.

October 21, 2008 New on Ebon Musings: Spanish Translations
Recent Comments
0 | Leave a Comment
"This is beautifully written, Adam. Thank you."
Rieux Strange Hours
"Generally speaking, the fact that an opinion was held by a well-known person is not ..."
J-D 2000 Years of Disbelief: Thomas Jefferson
"At the same time, we’re united by this common enemy. The virus makes no distinctions ..."
Leo Buzalsky Strange Hours
"Thank you so much for this beautiful, poetic essay. I'm so glad you--and, I hope, ..."
anxionnat Strange Hours
Browse Our Archives
Follow Us!