A few months ago, a theist contacted me by e-mail to claim that her church, the Mormons, had fulfilled many of the criteria set forth in my essay “The Theist’s Guide to Converting Atheists“. There was one criterion she thought was unfair of me to list – evidence of miraculous occurrences brought about through prayer:

This one is rough, mainly because faith must precede the miracle.

Similarly, another theist who contacted me by e-mail claimed that it didn’t matter whether anyone could answer any of my arguments now, because God will answer them after I die if only I believe in him:

He will answer all your hard questions when you see Him face to face. It will all make sense then.

I’ve heard this argument from members of many sects – Mormons, Muslims, even Scientologists. All of them make the same claim, that God does not do miracles in front of unbelievers, that they are reserved exclusively as a reward for those who already believe. A similar claim comes from psychics who say that they can’t demonstrate their abilities in the presence of skeptics like James Randi, because the skeptics give off “negative energy” that causes their powers to fail.

I marvel at the degree of doublethink that must be pulled off in order to sustain such an argument. For the religious apologists who make this claim, what they’re essentially saying is that God chooses to withhold evidence until just after it’s too late for it to make any difference. It’s the opposite of how any scheme of rational persuasion should work: withhold evidence from those who are yet to be convinced; give evidence only to those who are already convinced. Such a plan could only be enacted by an irrational, capricious being who actually desired that people did not believe. What other motivation could there be for God refusing to reach out to the very people he’s allegedly trying to persuade?

Given the vast number of incompatible religions and conflicting miracle anecdotes, it would be utterly unreasonable for a deity to expect people to somehow pluck the one true religion out of the multitude of imposters. Any god that truly wanted people to believe would be obligated to present clear and convincing evidence to distinguish itself from all the false faiths. How else could people possibly be expected to figure it out?

It’s no surprise that this claim is repeated among superstitious and pseudoscientific belief systems of all kinds. This is exactly what we would expect advocates of a false belief system to say – because, for obvious reasons, that’s the only thing a false belief system could say when challenged to present its supporting facts. “Believe first and then you get the evidence” is a convenient defense, one that relieves apologists of the troubling necessity of having to support their beliefs in any way at all. It also gives them a rhetorical boost by portraying doubt and skepticism as sinful actions which God chooses to punish by withholding evidence, an implicit attempt to claim the moral high ground and punt the burden of proof back to the questioner. And of course, once the prospective member already believes, no evidence needs to be presented.

The contrast between atheism and the faith-comes-first belief systems could not be clearer. Unlike religious worldviews, atheism makes no demand for belief before evidence. Unlike religious worldviews, atheism makes no claim to possess secret evidence that will be revealed only to those who approach with the proper attitude of humility and submission. In the light of reason, there is no secret evidence and no faith required in advance: we can freely present all the facts and invite people to make the most rational decision based on that. 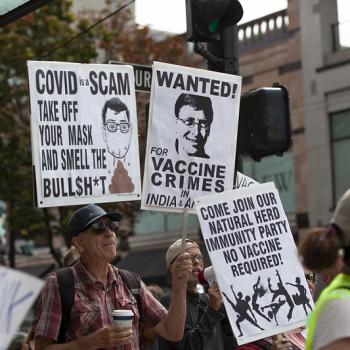