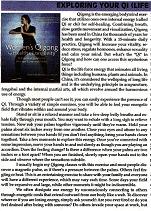 A popular notion in traditional Asian cultures, as well as the garbled versions of Asian culture imported into the West by the New Age movement, is the idea of qi (or chi), the vital energy that permeates the universe and flows through living things. A wide variety of pseudoscientific beliefs are based on qi, and today’s post will examine some of them, through the lens of an article in a local alternative newspaper I picked up touting qi’s uses in interpersonal relations and healing.

The author, Deborah Davis, starts out by defining her terms:

Qi is the life force energy that animates all living things including humans, plants and animals.

As any skeptic should recognize, this is one of the oldest superstititions known to humanity: vitalism, the belief that there’s something irreducible and magical about life. This belief has persisted for millennia, even as the progressive workings of science reveal more and more about how life works and leave increasingly less room for magic. We’ve studied bacteria, we’ve investigated the cell: at the bottom everything happens through the interplay of genes and chemical reactions. There is no part left over for qi or the soul or vital forces to play.

Next, she describes how to detect qi:

Stand or sit in a relaxed manner and take a few deep belly breaths… Now rub your palms together vigorously until they’re warm. Hold your palms about six inches away from one another. Close your eyes and attune to any sensations between your hands (if you don’t feel anything, bring your hands closer together).

…I usually begin my Qigong classes with this exercise and most people discover a magnetic pulse, as if there’s a pressure between the palms.

What this passage describes is an excellent way of invoking the ideomotor effect, a phenomenon that’s also exploited by pseudosciences such as dowsing and Ouija boards. Simply thinking about moving your hands in one direction creates subconscious muscle movements, which a sensitively balanced instrument such as a dowsing rod can reveal. Without an instrument, this is harder to notice, which is why Davis helpfully advises that the sensation may be almost indiscernible and that you should move your hands around until you feel something.

It’s also noteworthy that what Davis describes is a standard technique used by hypnotists to gauge how suggestible a person is. More suggestible people are more likely to feel an imaginary force pulling their hands together in response to the hypnotist’s prompting, which has interesting implications for people who believe in the power of qi.

Others feel tingling or heat. This is an entertaining exercise to share with your family and everyone will have a different experience, which may vary each time.

What Davis apparently forgets is that one paragraph above, she advised starting by rubbing one’s palms together vigorously, which could produce sensations of heat or tingling for entirely non-supernatural reasons. But more importantly: “everyone will have a different experience, which may vary each time”?

If there is no consistency to the feelings she believes indicate the presence of qi – if everyone may feel something different each time they try it – then how does she know that everyone’s feelings come from the same source? How does she know that all these infinitely variable experiences can all be attributed to one phenomenon which she calls qi? Any valid scientific theory must have a well-defined explanatory scope; a theory that can explain anything explains nothing. By contrast, being compatible with any possible evidence, real or hypothetical, is the mark of a pseudoscience.

Begin by sensing the energy field (Qi) surrounding your being; palpate the space about one to three inches away from your body with your palms. It’s very subtle. Close your eyes to help you focus inward.

The above comments about ideomotor reactions and suggestibility apply here as well. But Davis, without noticing it, has given us a test for whether qi is real. If we can feel others’ qi without knowing whether there’s a person present, then we would have excellent evidence that this is a real phenomenon, even if we haven’t found any other way to measure it.

As it happens, just such an experiment was carried out – by a nine-year-old girl. Emily Rosa, for a school science fair project, had qi-believing practitioners of “therapeutic touch” insert their hands through a hole in a screen and try to determine if another hand was present below theirs. Unsurprisingly, they did no better than chance; their results were indistinguishable from random guessing. Emily’s results were published in the prestigious Journal of the American Medical Association, making her the youngest person ever to earn such an honor. If Davis or anyone else thinks they can improve on the performance of the practitioners in that study, I invite them to try it.

The article closes with this blurb about Davis’ book:

Qigong for cancer? Breathing exercises and waving one’s hands around might help with everyday stress, but to suggest this as effective treatment for a life-threatening medical condition borders on criminal irresponsibility. If there’s any evidence that this technique can give any tangible benefit to cancer sufferers, we would welcome it. If there isn’t, advocates of these ideas should stop offering false hope to the gravely ill.

In closing, I have one more question. Any website on qi will have elaborate charts of the “meridians” and “chakras” that track qi’s flow through the body, similar to the one on the left. My question is: How were these charts derived? Similar to Skeptico’s astrology challenge, I want to know how the ancient people who first came up with these ideas determined all of this. What studies did they conduct, what experiments did they run? Can I see their data for myself?

These are not facetious questions; they are questions that scientists spend their careers answering. If we want to improve our understanding of some phenomenon, we need to tease apart all the threads of causation that contribute to it and test them individually to determine which ones can best be manipulated and in what proportion. If qi is not just a patchwork of anecdote and superstition, if there is something substantive to these beliefs, then there must be a body of evidence underlying it. Can skeptics of qi see this evidence for ourselves?

January 23, 2009 Administrative Notes
Recent Comments
0 | Leave a Comment
Browse Our Archives
get the latest from
Daylight Atheism
Sign up for our newsletter
POPULAR AT PATHEOS Nonreligious
1

Were the Sacrifices Worth it?
No Longer Quivering
Books by This Author Books by Adam Lee