On a wintry day late last year, I visited the Museum of Natural History in New York City. While touring the geology wing, I came across this boulder-sized chunk of a rock formation: 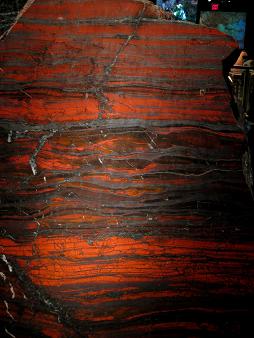 A banded iron formation from the geology exhibit of the Museum of Natural History. Photo credit to Erich Vieth.

It was out in the open with no ropes or glass around it, inviting visitors to touch it. I brushed a hand across its polished surface, which was as smooth and cool as a sheet of glass. Nothing about that touch hinted at the stone’s age or history; yet it had traveled down immense vistas of time to come here, to our era, so that I could see and touch it on that day. And in the moment of that touch, I knew, I as a modern Homo sapien was briefly reunited with predecessors ancient beyond imagining, perhaps some that date back almost to the origin of life on Earth itself.

The curious, gorgeously colored strata of this stone are called banded iron formations. The dark bands are layers of metallic iron oxide compounds such as magnetite and hematite, while the reddish layers are silica-rich quartz minerals like chert, jasper and flint. Banded iron formations occur almost exclusively in very ancient rocks, and are common in strata dating to between 2.5 billion and 1.8 billion years ago. This is the period commonly called the Precambrian, although its more technical name is the Proterozoic Eon.

True multicellular life first appears in the fossil record at the very end of the Proterozoic, in the form of the bizarre and famous Ediacaran biota that would become the precursors of the Cambrian explosion. But for most of the Proterozoic, the most common fossils are stromatolites: puffy accretions of sedimentary rock laid down by vast colonies of bacteria.

The Earth in this eon was a different place. Most notably, from chemical and geological evidence, we know that its atmosphere had no oxygen. The only life was colonies of purple bacteria, making a living using the chain of chemical reactions called photosystem I, which converts light, carbon dioxide and hydrogen sulfide into sugar and releases sulfur as a byproduct. But the Proterozoic was when this began to change: this was the time when evolution invented photosystem II, the more advanced version of photosynthesis that uses water and carbon dioxide to make sugar, liberating oxygen as a byproduct. This is the very same set of reactions that sustains all green plants, and ultimately all animal life, today, two and a half billion years later.

At first, oxygen was an annoyance to Proterozoic life, but it soon became a menace. Unlike today, there were no oxygen-breathing animals to expire carbon dioxide and close the cycle, and so it quickly built up in the atmosphere as photosynthetic bacteria spread and thrived. To us, it’s the breath of life, but to these bacteria, it was a deadly toxin.

At the same time, another process was taking place. Weathering of the Earth’s primordial rocks had been releasing iron, most of which washed down to the sea and ended up as iron ions dissolved in the oceans. Until then, that iron had had nothing to react with, but when it encountered oxygen, the two chemically combined into iron oxides like magnetite and hematite. These compounds are insoluble, and when they formed, they precipitated out and sank to the ocean bottom, gradually building up those dark silver layers.

With iron reactions steadily removing oxygen from the atmosphere, anaerobic bacteria thrived for a time. But eventually, there was no more free iron. Once that point was reached, oxygen started to build up in the atmosphere. Heedless, the bacteria kept churning it out – until a toxic tipping point was reached, and the Earth’s atmosphere was changed to such an extent that it became poisonous to Earth’s life. The consequence was mass death among the planet’s abundant bacterial colonies – an oxygen holocaust that knocked life back down to nearly nothing. Only a few anaerobes survived, in isolated nooks and crannies where the deadly gas did not reach.

After this catastrophe, the planet would have seen several million years of relative quiet. In this life-poor era, layers of silica minerals were deposited on the ocean floor. But in the meanwhile, erosion continued to free up iron atoms, which slowly scrubbed the atmosphere and oceans of oxygen. Eventually, the world was cleansed, and life bounced back, spreading from its refuges to once again cover the planet. Of course, this exuberance contained the seeds of its own downfall – bacteria still spewed out the waste oxygen that they could not abide – and the cycle repeated, not just once but many times. Each time, a layer of iron oxides was deposited, followed by a layer of iron-poor silicates in the aftermath. And that leads me back to the Natural History Museum, on that cold winter day where I stood and brushed a hand across a banded iron formation.

Looking at this stone, you get some idea of the dizzying vistas of geological time, as well as the turmoil that life has endured to reach the present day. Each of those colorful red and silver layers represents what was, in its own era, a disaster beyond imagining, one that reset life to its starting point. Each of those layers, as well, is a silent testament to life’s tenacity in the face of overwhelming odds. Of course, the cycles of growth and destruction did not last forever. Eventually, evolution found a way, as evolution nearly always does, and oxygen was tamed to become a power source in an entirely new metabolic cycle. The oxygen-breathers arose, the remaining anaerobes retreated to the deep crevices of rocks and the sea, and life found a new equilibrium, with the balance of the atmosphere permanently changed. All the oxygen we breathe today is biologically produced, a tangible proof of life’s power to reshape its own world.

As well, these banded iron formations may be a metaphor for our own foolhardiness. In our time, we too are changing the composition of the planet’s atmosphere, this time through the release of greenhouse gases. In the process, we are becoming the first species since the ancient photosynthetic bacteria to have such a global effect. The danger we face may not be as severe – but it is severe enough. Those bands of iron are not only a record: they are a warning of what happens when life reshapes its own environment without thought for the consequences.

February 14, 2009 Love Is No Sin
Recent Comments
0 | Leave a Comment
"Yay! Welcome back, Adam!"
HematitePersuasion Daylight Atheism Is Back
">That's why Isaac Asimov was unwilling to write for Hollywood. He was concerned that his ..."
hrurahaalm The Fountainhead: Holy of Holies
"Into the Abyss is still locked to non-patrons; I didn't realize you hadn't switched to ..."
Beroli Commonwealth, III.XVII: Project Chicxulub
"Hi, Nitin, thanks for upvoting me and reminding me of this review of the Charlie-Foxtrot ..."
Raging Bee The Fountainhead: The Jewish Eugenicist
Browse Our Archives
get the latest from
Nonreligious
Sign up for our newsletter
POPULAR AT PATHEOS Nonreligious
1