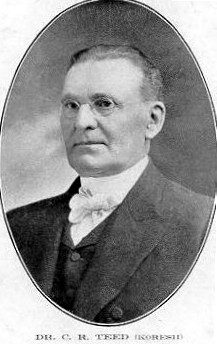 It seems that every religion has at least one signature bizarre belief: whether it be that the messiah is an American soldier who will return from across the ocean bringing marvelous cargo, or that human beings are possessed by the ghosts of murdered aliens, or that God wants us to transform him into crackers and consume him each week. But for sheer extravagant, defiant wackiness in the face of obvious disproof, you can’t beat the subject of today’s entry.

An enduring notion in humanity’s meme pool, one that’s captivated obscure crackpots as well as famous sci-fi authors like Jules Verne and Edgar Rice Burroughs, is that the Earth is hollow and habitable within. But the prophet Koresh, born Cyrus Reed Teed, took this charmingly crazy idea to a previously undreamed-of level: yes, he claimed, the Earth is hollow – and we’re living on the inside.

Cyrus Teed was born in rural New York in 1839. By coincidence, he was a distant cousin of the Mormon prophet Joseph Smith. He served in the Union army and afterward studied medicine at the Eclectic Medical College, an unorthodox institution teaching what would today be called alternative medicine, focusing mainly on homeopathy and botanical remedies. (To be fair, bloodletting was still the state of the art in conventional medicine.) The recently-discovered laws of electromagnetism were all the rage at the time, and when Teed hung out his shingle, he blended his botanicals with what he called “electro-alchemy”, which employed strategic zaps of electricity, as well as liberal doses of religious mysticism and spiritual mumbo-jumbo, to cure his patients’ ills. In his spare time, he also dabbled in alchemy and claimed to have discovered the long-sought Philosopher’s Stone which turns any base metal to gold. David Standish’s delightful book Hollow Earth calls Teed’s practice a “peculiar amalgam of doctoring and cosmic revelation”.

Even then, Teed held his curious belief that the world is hollow and that we all live on the inside, which he called the “cellular cosmogony“. I just have to quote some of his magnum opus to give you a feel for it:

The alchemico-organic (physical) world or universe is a shell composed of seven metallic, five mineral, and five geologic strata, with an inner habitable surface of land and water. This inner surface, as the reader already understands, is concave. The seven metallic layers or laminae are the seven noble metals,—gold constituting the outermost rind of the shell. This shell or crust is a number of miles in thickness. Within this shell are three principal atmospheres, the first or outermost (the one in which we exist) being composed chiefly of oxygen and nitrogen; the one immediately above that is pure hydrogen, and the one above the hydrogen atmosphere we have denominated aboron [word invented by author —Ebonmuse]. Within this is the solar electromagnetic atmosphere, the nucleus of which is the stellar center. In and occupying these atmospheres are the sun and stars, also the reflections called the planets and the moon. The planets are mercurial disci moving by electromagnetic impulse between the metallic laminae or planes of the concave shell. 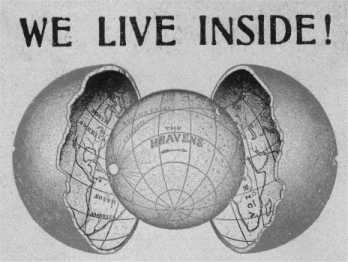 This alone wouldn’t have elevated Cyrus Teed above the garden-variety kooks, but fate had greater things in store for him. As his beliefs continued to evolve, he decided he had a higher calling than quack doctoring, and began calling himself the “Prophet Koresh”. Moving seamlessly from pseudoscientific medicine into pure faith healing, he established the first “Koreshan” community in Chicago. This was a combination of church and commune, presided over by Teed (or Koresh) that preached celibacy, the hollow earth, electro-alchemy, and Teed’s belief in a deity who was the harmonious union of male and female. Partly due to this, the Koreshan community was surprisingly enlightened for its time regarding the equality of the sexes, and many of its earliest followers were women.

Over several years, the number of followers grew. By 1888 Teed had 126 devotees in Chicago, nearly three-quarters of whom were women. Finally, he decided it was time for them to seek more spacious quarters elsewhere, so that he might build his New Jerusalem. The spot he settled on was a place called Estero on the southwestern Florida coast. Teed’s ambitious vision was to build a great city, populated by tens of millions, all laid out according to his utopian schemes for a harmonious, socialist community of art, science, advanced technology – and, of course, the hollow earth.

Needless to say, Estero never attained this stature – the Prophet Koresh’s cult topped out at around a few hundred – but it was a genuinely productive, peaceful community, and aside from an unsuccessful foray into local politics, got along well with surrounding towns. Unlike many cult leaders, Teed never used his immense power over his followers for personal benefit. His primary interest continued to be writing broadsides in Koreshan publications such as the Guiding Star (later renamed to the Flaming Sword, which evidently focus-grouped better) in favor of the hollow earth and against “that dangerous fallacy, the Copernican system”. As Teed explains, the cosmos had to be as it was in his vision, because God wouldn’t have created a universe too great for us to understand:

If we accept the logical deduction of the fallacious Copernican system of astronomy, we conclude the universe to be illimitable and incomprehensible, and its cause equally so; therefore, not only would the universe be forever beyond the reach of the intellectual perspective of human aspiration and effort, but God himself would be beyond the pale of our conception, and therefore beyond our adoration.

Sadly for Teed, neither his utopian vision nor his hollow-earth theology were ever to make a larger impact on humanity: after a lingering illness, he died in December 1908. But his followers did not lose faith, because another of Teed’s preachings was what he called “theocrasis”, “the incorruptible dissolution of the physical body by electro-magnetic combustion”. In short, Teed claimed that, phoenix-like, he could resurrect himself. His devoted followers accordingly placed his body in state… and waited. And they kept waiting while their prophet decomposed, until local health authorities showed up, declared the Prophet Koresh to be obviously dead, and forced his body to be buried.

After Koresh’s death, the community dwindled, but did not break up altogether. Amazingly, it was not until 1961 that the last few die-hard Koreshans deeded Estero to the State of Florida. It is now a state park, although Teed’s mausoleum was washed out to sea in a hurricane in 1921. Only his granite headstone remains.

The cult of Koreshanity shows how shared devotion to any idea, no matter how bizarre, can serve to unite people under a common purpose. The specific nature of the belief is irrelevant, so long as it serves to give its adherents a sense that they are among the elect. If they are scorned and rejected by the wider world, so much the better, as this shared sense of persecution serves only to temper their communal bond. And the next time a proselytizer claims that belief in God is a necessary inducement to virtue, remind them of the Koreshans. By all accounts, their hollow-earth belief genuinely did produce, temporarily, a utopian community of peace, industriousness, and equality. Does that make their belief any more true?