The Case for a Creator: Ancient Wings

The Case for a Creator, Chapter 3

Up until now, Jonathan Wells’ critiques of evolution, although misguided, have been fairly sophisticated, touching on topics such as abiogenesis, the Cambrian explosion, and embryology. That’s about to change. In this section, Wells and Strobel haul out the most breathtaking, shameless lie bandied about by creationists: that there are no such things as transitional fossils. This opening quote foreshadows the direction they’re going:

I was under the impression that [Archaeopteryx] was featured in my books on evolution because it is just one example of many transitional links that have been found. But I was wrong. [p.56]

Strobel then quotes this jaw-dropping passage from Michael Denton:

[T]he universal experience of paleontology… [is that] while the rocks have continually yielded new and exciting and even bizarre forms of life… what they have never yielded is any of Darwin’s myriads of transitional forms… The intermediates have remained as elusive as ever and their absence remains, a century later, one of the most striking characteristics of the fossil record. [p.56]

Even by creationist standards, this is a bald-faced and brazen lie. Not only do transitional fossil series exist, we have a strikingly large number of them, bridging most of the major evolutionary changes in life’s history. But don’t take my word for it, see the evidence for yourself.

But this section focuses on Archaeopteryx, a particularly striking example of evolutionary transition. This feathered dinosaur is far too well-known even for creationists to deny it exists, but Wells tries to fog the evidence by implying that it’s not really transitional:

“Besides, we see strange animals around today, like the duck-billed platypus, which nobody considers transitional but which has characteristics of different classes.” [p.57]

This is another example of the things Wells should already know. In fact, the platypus is transitional – albeit a kind of living transition.

The platypus belongs to a very rare group of mammals called monotremes. Although these animals have fur, give milk and show other mammalian traits, they have others that are more primitive, most notably the fact that they lay eggs. They also lack the well-developed nipples of mammals that their young can suck on; their milk oozes from glands on their chest, and the babies lick it up. But they also have advanced adaptations not shared by other mammals, like venomous spurs or the platypus’ famous “bill” – which has nothing in common with the bills of ducks, but is actually an electrosensitive organ of exquisite sensitivity.

Living monotremes are found only in Australia and New Guinea, and this separation is a clue to their evolutionary history. The most likely explanation is that, during the Mesozoic era, the animals that would ultimately become mammals split into several branches. One branch became the placental mammals, which includes us. Another branch became the monotremes. Both groups inherited proto-mammalian features such as fur and milk from their common ancestor, while others, such as the bearing of live young, evolved in placentals after the branch point, while monotremes retained the ancestral egg-laying state. In this sense, and discounting its own unique adaptations, the platypus is a sort of living example of what our common ancestor might have looked like.

But, back to Archaeopteryx. As I said, even Wells can’t deny it exists, but he does resort to lying about the nature of the species:

“But the archaeopteryx is a half-bird, half-reptile, right?”
“No, not even close,” he insisted. “It’s a bird with modern feathers… not part bird and part reptile.” [p.57] 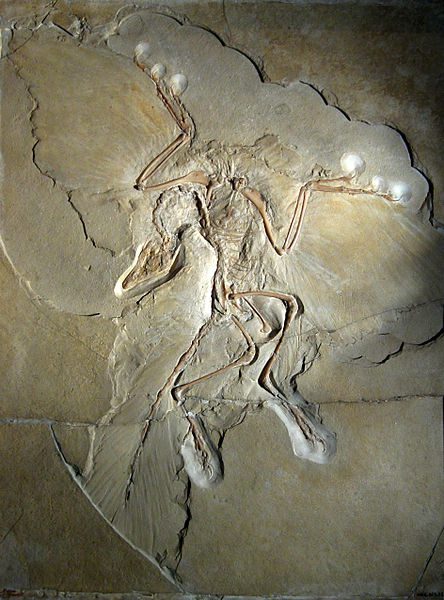 Wells makes no attempt to justify this assertion, because it is patently false. Other than its feathers and a few other subtle characteristics, Archaeopteryx is actually much more like a dinosaur than it is like a bird. The Talk.Origins Archive’s All About Archaeopteryx FAQ lists its reptilian features, which far outnumber the avian characteristics. (See also.)

And even besides this, what about the many other feathered dinosaurs, such as Sinornithosaurus and Microraptor? Over twenty genera of feathered theropods are known, most from China. Wells steers well clear of these, other than to mutter an accusation that they’re probably all fakes [p.59]. We do, however, get a sermon on Archaeoraptor, which serves the same purpose as Haeckel’s embryos – a convenient whipping boy for creationists which they use to distract attention from the real facts that support evolution.

Archaeoraptor was a chimera – a composite of bones from several different animals – most likely created by unscrupulous amateur fossil hunters. The fraud was detected almost immediately, within a matter of weeks, and was never published in peer-reviewed papers (source). In fact, the Archaeoraptor saga is an excellent example of how science is supposed to work. The only reason we’re hearing anything about it is because one popular, non-peer-reviewed publication, National Geographic, exercised insufficient caution and ran with the story before scientists had authenticated it.

After lying about the existence of well-known scientific evidence and accusing paleontologists of mass fraud, Wells has one final card to play:

As I said earlier, Wells has an education in biology and should know better than to make these obviously deceptive claims. A real scientist would have known the explanation for this immediately and would not have tried to mislead readers by implying that this is unexpected or a problem for evolution.

Evolution rarely, if ever, works in a single, smooth trajectory of change – species A changes into species B, which changes into species C, and so on. Instead, what we usually see is a path of descent more like a densely branching bush: species A radiates into species B1, B2, B3… and so on. Most of these go extinct, but B2, say, speciates into C1, C2, and C3, and again, some of the daughter species go extinct and others diverge in their own ways. But species don’t have fixed lifespans, and there’s nothing to dictate how long a particular species will survive before it goes extinct. There may still be living species from the A or B generation existing side-by-side with far more advanced descendants. (Readers are referred, again, to the platypus for an example of how this can turn out.)

In the case of Archaeopteryx, that’s just what happened. In the bird family tree, feathers were an early innovation, one that arose before most of the other features typical of modern birds, and Archaeopteryx was one of the earlier species to have them. (Remember, again, that it has far more reptilian than birdlike characteristics.) But other feathered reptiles, other lines of descent in the same family tree, spun off descendants of their own, and some of these had more of the features that, in retrospect, we classify as diagnostic of birds. In short, Archaeopteryx wasn’t a direct ancestor of modern birds: it was an aunt or an uncle. But even if it’s not on the direct line of descent, it’s still a powerful and compelling example of transition in progress, one twig on the branching tree of life’s history.

July 15, 2009
The Contributions of Freethinkers: Zora Neale Hurston
Next Post

July 18, 2009 Dignity in Dying: An Atheist's View
Recent Comments
0 | Leave a Comment
"... along with the 'heavenly host', presumably."
David Cromie When Prophecy Fails: Trump Edition
"But she got paid the same, right?"
Syzygy When Prophecy Fails: Trump Edition
"i'd say, a little more broadly, that they care about their reputation, but only about ..."
Griff Pryce Fundamentalist Intolerance
"it's true. whether they like it or not, they are becoming obsolete. [i'm reminded of ..."
Griff Pryce Fundamentalist Intolerance
Browse Our Archives
get the latest from
Daylight Atheism
Sign up for our newsletter
POPULAR AT PATHEOS Nonreligious
1