The Lesson of Autumn Leaves: A Humanist Sermon

November is a good month for poetry.

Most great poetry is about transience, and with autumn in full swing, there’s much in November to inspire the poet’s thoughts on that topic: the last yellow and brown leaves raining from the trees; the early fall of dusk as the days continue to shorten; the gray skies and cool days as the first taste of winter frost becomes perceptible in the air, and the world settles in for its yearly sleep.

While I was walking in the leaves the other day, I had a minor inspiration. It occurred to me that there’s a common thread woven through religious belief. The theists, in their apocalyptic dreams and mirages, long for something that’s eternal and unchanging: God’s eternal kingdom, the city with gold walls and gates of precious stones, or C.S. Lewis’ heaven that opens like an onion, each layer more beautiful than the last. Or, more ominously, the worm that never dies, the fire that’s never quenched, or Dante’s vision of the damned being boiled forever in rivers of blood, frozen in perpetual ice and snow, or trudging in endless circles so they can be hacked to pieces by demons on each pass.

Either way, what the Earth’s major monotheisms teach us to desire is permanence: a world immutably fixed in its course, never to change again. They want the race to be run, the final victory to be attained, and all strife and toil ended. They want existence sorted and classified so that they’ll never know pain or loss again, while their enemies will suffer in infamy for all eternity.

But as we learn from the autumn leaves, that isn’t the way of nature. The world does not trade in permanence, but in perpetual rebirth and renewal. 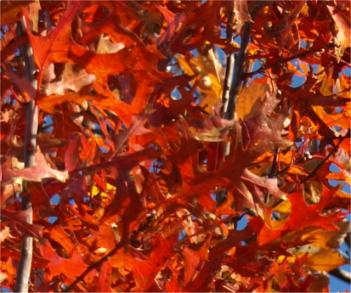 Observe nature, and you’ll see this pattern at every level. Mountains are thrust up and then worn away to nothing. Rivers and streams flow to the sea, become choked with life and silt up, and then fan out and cut new courses across the landscape. Deserts and grasslands sweep back and forth, impinging on each other’s boundaries. Plants sprout in the spring, bloom in the summer, die in the fall, and are reborn after the winter. Even within our bodies, new cells are always being created as old ones are destroyed and recycled. In every case, what we see is rebirth and renewal – not a state of changeless stasis, as the religious wish for, but a constant, dynamic tension between destruction and rebuilding; an endless flux of old forms passing away as new ones arise.

In fact, we owe our very existence to such a process. Though a seamless thread of historical continuity links all of us to the very first life on Earth, there is no single molecule, no single cell that has come down to us intact from that moment of genesis. What has been passed down is a pattern, a template of information constantly being copied from one physical substrate to another, constantly being born again with each generation – although, because of the ceaseless scouring and reconstructing of evolution, not even that pattern has survived unchanged.

Knowing that we are part of nature, that our lives are also evanescent swirls in the great river of change, is not a vision that everyone finds reassuring. Hence, sermons like this one, which assures hearers,

…we know death is wrong. It was never part of God’s plan for creation. You were made to last forever. God designed you in his image to live forever.

This is a view that animated bits of carbon may be expected to take. We’re anxious to convince ourselves that we are exempt from the rules that apply to all other living things, that our destiny is not like theirs, and it’s no surprise that theologies which fulfill our fantasies with promises of immortality and endless bliss have found millions of takers. But all the soothing platitudes in the world can’t change the fact that, despite all that we’re capable of, we too are like those autumn leaves. We bloom and burst into full color; in our heyday, we’re fiery and beautiful; and then, ultimately, we fade, fall away, and are gone. Henceforth we belong to memory, and it’s left up to future generations to continue the work of humanity. 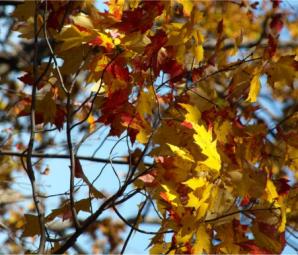 There are those who would say that this viewpoint, this recognition of our transience, is a reason to despair. Unless our lives are endless, so they say, we must feel hopeless. That, too, is a claim that I deny.

The knowledge that our time is brief is not a reason to fix our gazes with dread on the end, but to ground our vision in hope for the present. Knowing that we will not be here forever, we have the strongest possible incentive to make the most of what time we have, and to live with happiness and fulfillment of purpose. Our time is finite, so let us use it wisely, and dazzle the world with what we can accomplish before we go. That, too, is the lesson of the autumn leaves.

November 27, 2009 The Case for a Creator: Galileo the Troublemaker
Recent Comments
0 | Leave a Comment
Browse Our Archives
Follow Us!