I have some urgent news to pass along to my readers:

If you have any vacation time accrued, you may want to use it before May 2011.

Why, you may ask? Well, because the world is ending – again: 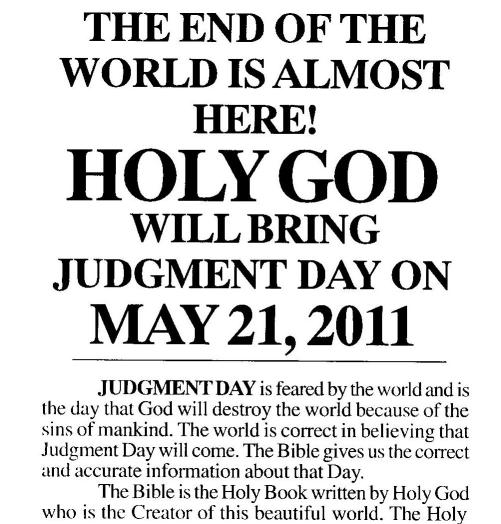 I learned this important news from a pamphlet that a street preacher was passing out at the Veterans’ Day parade the other week. (You can read the full thing if you’re really interested: pages 1-8, 2-3, 4-5, 6-7.) This information was brought to you by Family Radio, the “Bible-based Christian broadcasting ministry” whose founder, Harold Camping, has been slowly but surely getting crazier as the decades pass. One of his more notable eccentricities is his belief that the “church age” has ended and that all faithful believers should therefore stop going. Needless to say, this hasn’t endeared him to his fellow Christians.

Camping last predicted the end of the world in 1994, as I wrote in “Coming Soon to an Apocalypse Near You” – but hey, we all make mistakes, and this time he’s really sure he’s got the date right. How can he be so confident, you ask? Well, Mr. Smart-Aleck Atheist, just you try to argue with this irrefutable logic:

See? All you have to do is take the date of Noah’s Flood (which really happened, and the date of which Harold Camping knows precisely, down to the day), add 7,000 years, and there you are. Just try to find a logical hole in that!

Since he seems so confident about himself the second time around, I wonder if I could interest Mr. Camping in the purchase of a Rapture Bond, or otherwise making some sort of wager on his certainty. I tried, but failed, to find contact information for him on his website, which also looks like it was designed circa 1994. If you care to look and have more success than me, please do let me know.

If Camping was just one lone kook, I wouldn’t bother discussing him. But he’s still the president of a large ministry on dozens of radio stations nationwide, which means he must still have thousands of followers willing to fund him, despite his 1994 failure. That’s the way it usually is: to believers enraptured by prophecy mania, even repeated failures of their prophet are no discouragement. When 2011 comes and goes and nothing happens, Harold Camping, if he’s still alive, will probably just pick a new date, and his true devotees will faithfully follow for as many times as this charade is repeated.

December 5, 2009 Atheists Helping the Homeless
Recent Comments
0 | Leave a Comment
"Small correction, we know better now than when Sagan wrote it:Witch hunts happened essentially just ..."
Martin Penwald Carl Sagan: Brilliant Skeptic
"This was God's will...the problem is, there are so many gods that they got distracted ..."
Bill L. When Religious Rituals Turn Deadly
"This is the first time I've been to Patheos in years. Don't remember why I ..."
Michael Valentine About Patheos Copy Protection
"See John Zande's "The Owner of All Infernal Names", available on Amazon (Satan incarnate right ..."
basenjibrian Why Would God Drown Children?
Browse Our Archives
get the latest from
Daylight Atheism
Sign up for our newsletter
POPULAR AT PATHEOS Nonreligious
1