When the church service let out, my friends and I toured several other buildings on campus. We stopped by the dorms, which are strictly gender-segregated: 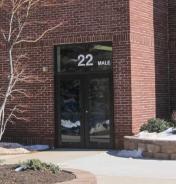 I wonder what mindset lies behind this. Is it because the trustees of Liberty believe it’s indecent for men and women to mingle in public? Then why aren’t the classes and the church services also sex-separated? And why don’t they also enforce the biblical decree that women not wear jewelry or braid their hair (1 Timothy 2:9)? That’s as clear a command as you could ask for, but the administration of Liberty seems to be comfortable allowing students to flout it.

As with many aspects of evangelicalism, I think this rule is more concerned with avoiding the appearance of impropriety than actual impropriety. I mentioned earlier that Liberty’s official policy is that students aren’t allowed to spend a night off campus without prior permission, and even then, they can only stay at the home of a married Christian couple. This, like the segregated dorms, is presumably intended to discourage students from having sex. But it’s not much of an obstacle: after all, there’s nothing to stop two students from checking into a motel just for the day (or availing themselves of a secluded parking spot and the back seat of a car…). And sure enough, one of the first rumors we heard on campus was of a female Liberty student who had gotten pregnant and was being pressured to drop out of school.

The next building we visited was one of Liberty’s academic halls. This was the first place where the true nature of this university made itself unmistakably clear: the walls were lined with displays advocating young-earth creationism and making snide comments about “evolutionists”. I was surprised that they were daring enough to include Archaeopteryx – although, as you’ll note, the model plays up the resemblance to a pigeon, and the card doesn’t include any information about what this creature was or what evolutionists think about it.

But even that wasn’t the height of crazy. At the far end of the hall was a “Center for Judaic Studies”, with a display case filled with replicas of artifacts from Roman-era Palestine. A plaque next to the door announced that one of the offices within belonged to Dr. Thomas Ice, “Pre-trib Research Director”. I took a pamphlet from a box next to the door, which is reproduced in part below.

The sheer, undiluted lunacy of this newsletter goes on and on, blithely presenting ludicrous assertions about how the future will unfold as if they were undisputed facts. One can clearly see just how little effort Tim LaHaye put into fictionalizing these beliefs for the Left Behind series. Note this passage from one of the inner pages, which the author somehow managed to write without irony:

A highlight was the bestowment of the Walvoord award upon Tim LaHaye, John Whitcomb, and Chuck Smith… It was a moving experience to realize that those three men were all over 80 and have served the Lord their entire adult lives. Each man is still excitingly looking for the Lord’s return at any moment.

And Thomas Ice, despite the cheerful, froggy grin in his headshot, is an utterly demented kook, to judge by writings of his like this post:

Brannon Howse reveals the largely unknown story of how the Obamas are taking national their radical, socialist, and anti-Christian worldview training that was birthed through their organization “Public Allies”. The training will include “social justice” training which is code word for Communism, socialism and Marxism.

It’s not surprising that a person of this mentality would believe in the Rapture; this belief fits right into the paranoid mindset that’s constantly jumping at shadows and that sees evil conspiracies lurking around every corner. But it is amazing that such a person could ever be considered qualified to serve as a professor (at the “Pre-trib Research Center”, no less, as if there were were something to “research” about all this, rather than Christian believers telling each other the same fairy tales generation after generation).

At the time I saw all this, I laughed. Can you imagine anyone still believing this nonsense? was my initial reaction. But the more I reflect on it, the more sobering an experience it is. The fact of the matter is that there are people who do believe this nonsense, and are doing their best to broadcast it to the world – and, in large part, they’ve succeeded.

The church service was one thing; no one who attends that should have any illusions about what they’re going to hear or where that information is coming from. But what we have here is ignorance systematically misrepresented as knowledge, virulent religious delusion concealed behind a cargo-cult facade of science. This, perhaps, goes back to what I said before about evangelicals valuing the appearance of the thing more than the thing itself. It’s a strategy they’ve used very successfully here, presenting beliefs that are utterly insane in the manner and the style of academia.

The students who pass through these halls, most of whom have probably never been exposed to a contrary perspective in their lives, likely have no idea how contentious any of this material is. They’ll listen, they’ll lap it up, and they’ll believe it – because that’s what they’ve been taught to do. And when people who genuinely believe this go to the voting booth, when they influence the decisions that affect our society and the lives of everyone in it, this isn’t comical; it’s incredibly dangerous. When American foreign policy is based on fever-dream interpretations of the Bible; when research funds for science are allocated based on the myths and superstitions of the Bronze Age; when critical thinking is nonexistent and blind faith rules the day; when extremist religion is merged with politics; and when reason is drowned in paranoia and fearmongering, then our society is in grave danger. Liberty’s malignant fundamentalism, flaunted to the world without a hint of embarrassment, is a lesson for anyone who still thinks that religion is essentially benign.

Coming up: The campus bookstore, plus a visit to Jerry Falwell’s memorial.

Nonreligious
Commonwealth, III.XII: "That Alluring World That Is Not...
Daylight Atheism
TRENDING AT PATHEOS Nonreligious