You may have heard that, after an exasperating series of setbacks and delays, the massive particle accelerator called the Large Hadron Collider is finally up and running. Even in preliminary tests, it’s set records for the most powerful particle collisions ever recorded in a lab – and when it’s reactivated later this year, it’s expected to set new ones.

Recently, I was struck by this quote from a National Geographic article on the LHC:

So far, the CERN team has been very cautious as it ramps up toward full power — and that’s a good thing, said Fermilab’s [Dan] Green.

Even if caution means that it takes a while for experiments to start, Green said, “I’ve been in this business for more than 20 years. I can wait a little longer.”

When I read that, I was reminded of the medieval cathedral builders – the architects who embarked on these grand projects knowing, or so the story goes, that they wouldn’t see them to completion in their own lifetime. This selfless labor produced some magnificent architecture – but while I admire the beauty of great cathedrals, ultimately they’re sterile; they produce nothing of tangible benefit to humanity. But the same is not true of the great modern scientific experiments, the cathedrals of our time. These grand projects, while built on the same soaring scale and evoking the same reactions of awe and wonder, prove their worth by producing knowledge that expands our vision of the cosmos and humanity’s own place in it. 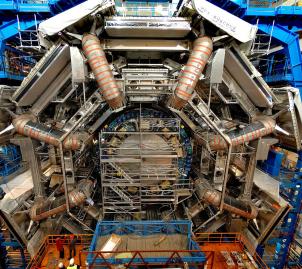 At right is a photo of ATLAS, one of the six particle detectors installed in the Large Hadron Collider and currently the single largest one of its kind ever built. Like an onion, ATLAS is constructed as a series of concentric layers, each one designed to detect and measure different aspects of the different kinds of particles produced by collisions in the LHC – superconducting magnets to bend the path of charged particles and reveal their momentum, calorimeters to absorb particles and record their energy, others to record radiation, velocity, electric charge, and so on. ATLAS is about half the size of the Notre Dame Cathedral, weighs 7,000 tons – about the same as the Eiffel Tower – and running at full capacity, can generate one petabyte – one million gigabytes – of raw data per second. (A network of computers will process this deluge of data to filter out the relatively tiny fraction of events that are of interest for further processing.)

Among other discoveries, ATLAS and the LHC are hoped to make the first conclusive detection of the Higgs boson, the elusive particle that may explain the existence of mass. If more esoteric ideas in physics are true – such as supersymmetry, the idea that every species of elementary particle has a previously-undiscovered, massive partner – ATLAS could also explain what makes up the majority of the universe’s dark matter. If certain hypotheses of string theory are correct, it could even even prove the existence of extra dimensions.

Another modern cathedral in the making is the Thirty-Meter Telescope, an enormous ground-based observatory to be built in Hawaii atop the summit of Mauna Kea. Scheduled for completion in 2018, the TMT will boast unparalleled range and sensitivity, observing the cosmos in wavelengths from infrared to ultraviolet with resolution as much as twelve times sharper than the Hubble Space Telescope. 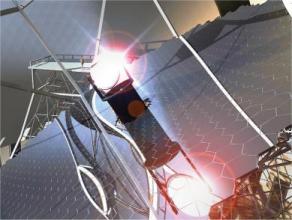 The TMT’s primary mirror, as its name suggests, will be thirty meters in diameter, giving it tremendous light-gathering capacity. (Hubble, by way of comparison, has a diameter of 2.5 meters.) But casting such a single, enormous piece of glass would be impossible – the mirror would sag under its own weight – so instead, the mirror will be made up of 492 hexagonal segments, each about a meter and a half in diameter and computer-controlled to work together as one. To compensate for the blurring effect of Earth’s atmosphere, the TMT will use a cutting-edge technology called adaptive optics. Nine laser emitters around the telescope will fire laser beams into the sky; sensors detect the photons that are scattered back to the telescope and compare their predicted waveforms with what’s actually observed. Using that information as a reference, the telescope’s computers will control thousands of mechanical actuators that reshape the mirror’s surface as rapidly as eight hundred times per second, with a precision measured in nanometers, to perfectly cancel out the distortion of the atmosphere – and all this as the entire massive assembly slews across the sky to keep pace with Earth’s rotation.

When complete, the TMT will be able to see the oldest and faintest starlight in the universe, back to the first stars that ignited just 400 million years after the Big Bang, and the formation of the first generation of galaxies. It will be able to directly observe Earthlike planets around nearby stars, detect supermassive black holes at cosmological distances and take direct images of their accretion disks, map the distribution of dark matter with unprecedented detail, and image the universe with greater clarity than was ever possible before.

One more example is LIGO, the Laser Interferometer Gravitational-Wave Observatory, currently up and running in the United States. Like the other scientific cathedrals, it shows the tremendous effort and astounding ingenuity that human beings have poured into understanding the details of the universe we live in.

The theory of general relativity predicts that cosmic catastrophes like the collision of two neutron stars or the merger of two black holes should produce gravitational waves – fluctuations in spacetime which ripple outward from their source. The direct detection of gravitational waves would confirm one of the last and greatest predictions of Albert Einstein, and could potentially provide important information about the behavior of black holes and other massive, distant objects that are difficult or impossible to observe in the electromagnetic spectrum – since gravitational waves, unlike light rays, are not blocked by cosmic gas and dust. 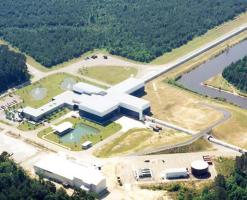 LIGO has two physically separate sites, one in Louisiana and one in Washington. Each site operates an identical detector: a laser interferometer, which consists of two tubes set up in an L shape. Each tube is two and a half miles long, is filled with an ultra-high vacuum, and contains a set of mirrors at each end. A beam splitter fires a laser beam down both arms of the L simultaneously; at the far end of each, it strikes the mirror and is reflected back to its point of origin. Under normal circumstances, the two lasers bounce back in perfect simultaneity. But the ripples of a passing gravitational wave would distort space in one direction, causing one of the laser beams to return before the other, which can be detected. If both sites register the same event simultaneously (accounting for lightspeed delay), we can be certain that it arrived from a cosmological source rather than some local event on Earth.

But even the strongest expected sources of gravitational waves, such as a merger of black holes, produce an effect that will be extremely faint by the time it reached Earth, due to the great distances involved. To account for this, LIGO needs astounding sensitivity and precision. The tube arms of the interferometer are filled with an ultra-high vacuum, evacuated to a pressure of just one-trillionth of an atmosphere, to prevent scattering of the lasers by gas molecules – one of the largest and purest vacuums ever created on Earth. (By comparison, the International Space Station orbits through atmosphere a hundred times denser.) And LIGO’s mirrors are cooled to just one-millionth of a degree above absolute zero to prevent thermal noise from distorting their surfaces. With these and other innovations, LIGO’s sensitivity and precision are such that it can detect a change in length as tiny as 10-18 meters – one-thousandth the diameter of a proton. And future improvements in the works will increase its sensitivity by a factor of ten.

These great cathedrals, devoted not to worshipping imaginary deities but to understanding the cosmos we live in, give me hope for humanity’s future in a way that few other endeavors do. Our world is still roiled by war, burdened by overpopulation, inflamed by religion, threatened by climate change. Yet in the midst of all the stupidity, all the greed and short-sightedness and delusion, there are places where human beings from many nations and cultures have come together to construct vast projects that are purely peaceful and devoted solely to the cause of gaining knowledge. There’s no better testament to the fact that, when we choose, we can rise above our worst instincts and cooperate on something worthwhile and beautiful. Even more than any of the specific scientific findings they may produce, this is the most valuable lesson that humanity in general has to learn from these modern wonders of the world.

February 12, 2010 The Dimension of Divinity
Recent Comments
0 | Leave a Comment
Browse Our Archives
get the latest updates from
Daylight Atheism
and the Patheos
Nonreligious
Channel
POPULAR AT PATHEOS Nonreligious
1