The Case for a Creator: ID on Trial

The Case for a Creator, Chapter 8

The best place to settle a scientific debate is in the peer-reviewed journals and the larger research community – a strategy which, as we’ve noted, the creationists have steered well clear of. This means, when they inevitably attempt to push their beliefs into public schools anyway, that we have to take them to court, and that’s where most direct encounters between science and creationism take place.

However, though it’s not an ideal forum for the advancement of scientific knowledge, the trial format does have its advantages. For one thing, we can cross-examine creationist witnesses and force them to answer direct questions – an opportunity not available on the internet, where they can hunker down behind the ramparts of their blogs and avoid all hostile or critical feedback. And when they’ve been put to the test in this way, they haven’t come out of the experience covered in glory.

In chapter 8, Lee Strobel gives Michael Behe the opportunity to repeatedly make assertions like this one:

“Complex biological systems have yet to be explained by naturalistic means. That’s a fact.” [p.216]

In the cozy environment of Strobel’s interview, this claim meets with no skepticism. Not a hint is given that evolutionary biologists have made any progress in explaining the origin of any complex biological system. But on another occasion, Behe had to defend these views in a considerably less friendly forum, and he didn’t fare nearly as well.

In 2004, the school board in Dover, Pennsylvania voted to include references to intelligent design in their biology curriculum. The ensuing lawsuit, Kitzmiller v. Dover, became a landmark in the evolution wars – not least because several prominent creationists agreed to appear as witnesses for the defense, among them Michael Behe.

The Talk.Origins Archive has complete trial transcripts, which you can read through if you want. However, I want to highlight an exchange from day 12, when Behe was cross-examined by Eric Rothschild, the lead attorney for the plaintiffs. Behe had claimed in his testimony that “the scientific literature has no detailed testable answers to the question of how the immune system could have arisen by random mutation and natural selection”.

Even compared to all the other falsehoods told by Behe, this stands out as his wrongest claim yet. The origin of the immune system has been a topic of active research for decades, and we’ve made enormous strides in our understanding of how it evolved. The key hypothesis, called the transposon hypothesis, makes several surprising predictions that have been verified by subsequent work. This seemed the ideal point to attack Behe when he took the witness stand, which led to this exchange:

Q. I’m going to read some titles here. We have Evolution of Immune Reactions by Sima and Vetvicka, are you familiar with that?

A. Most of them have evolution or related words in the title, so I can confirm that, but what I strongly doubt is that any of these address the question in a rigorous detailed fashion of how the immune system or irreducibly complex components of it could have arisen by random mutation and natural selection.

A. Yes, and my same comment would apply to those.

Q. I’m just going to read these titles, it sounds like you don’t even need to look at them?

A. Please do go ahead and read them.

Q. You’ve got Immune System Accessory Cells, Fornusek and Vetvicka, and that’s got a chapter called “Evolution of Immune Sensory Functions.” You’ve got a book called The Natural History of the Major Histocompatability Complex, that’s part of the immune system, correct?

Q. And here we’ve got chapter called “Evolution.” Then we’ve got Fundamental Immunology, a chapter on the evolution of the immune system.

A lot of writing, huh? 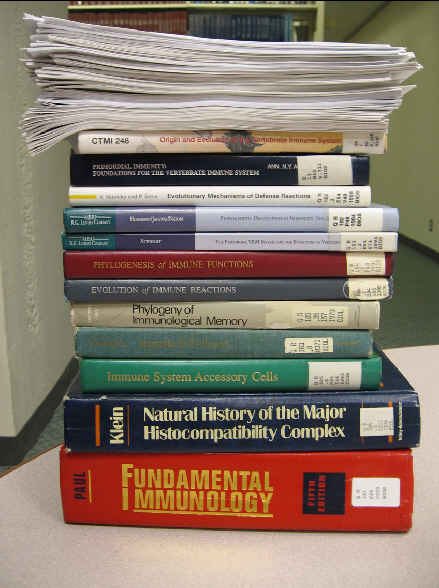 A. Well, these books do seem to have the titles that you said, and I’m sure they have the chapters in them that you mentioned as well, but again I am quite skeptical, although I haven’t read them, that in fact they present detailed rigorous models for the evolution of the immune system by random mutation and natural selection.

Q. You haven’t read those chapters?

Q. You haven’t read the books that I gave you?

A. No, I haven’t. I have read those papers that I presented though yesterday on the immune system.

Q. And the fifty-eight articles, some yes, some no?

A. Well, the nice thing about science is that oftentimes when you read the latest articles, or a sampling of the latest articles, they certainly include earlier results. So you get up to speed pretty quickly. You don’t have to go back and read every article on a particular topic for the last fifty years or so.

A. Again in the context of that chapter, I meant no answers, no detailed rigorous answers to the question of how the immune system could arise by random mutation and natural selection, and yes, in my, in the reading I have done I have not found any such studies.

The list of books and papers that Rothschild piled up on the witness stand, as you can see from the photograph, is extensive, and Behe admitted that he hadn’t read any of them. Yet despite this, he continued to insist that it was not possible that any of them contained an explanation good enough to satisfy him. If you want to see the list for yourself, the NCSE has an annotated bibliography – listing all the titles and excerpting their subject matter, to show how they directly address the origin of the immune system – the kind of detailed, testable scientific hypothesis that, according to Behe, does not exist. (See also Evolving Immunity.)

After forty days and forty nights of testimony (really), the Kitzmiller trial concluded, and Judge John E. Jones – a conservative George W. Bush appointee – issued a strongly worded decision which concluded that ID was religion, not science, and that teaching it in public school would be an unconstitutional state endorsement of religion. Behe’s testimony was singled out for criticism, as Judge Jones wrote:

Christian apologists like Lee Strobel go out of their way to present ID advocates in the best possible light, asking them easy, leading questions and ensuring that their answers go uncriticized and unchallenged. But in an open environment where they don’t control the terms of the debate and must confront the evidence, creationists meet with disaster time and time again. Is it any wonder that scientists have little regard for ID advocates, considering that their major arguments, like fragile hothouse flowers, must be carefully shielded from contact with the evidence lest they collapse?

February 16, 2010 Catholic Sex Abuse in Germany
Recent Comments
0 | Leave a Comment
"... along with the 'heavenly host', presumably."
David Cromie When Prophecy Fails: Trump Edition
"But she got paid the same, right?"
Syzygy When Prophecy Fails: Trump Edition
"i'd say, a little more broadly, that they care about their reputation, but only about ..."
Griff Pryce Fundamentalist Intolerance
"it's true. whether they like it or not, they are becoming obsolete. [i'm reminded of ..."
Griff Pryce Fundamentalist Intolerance
Browse Our Archives
get the latest from
Daylight Atheism
Sign up for our newsletter
POPULAR AT PATHEOS Nonreligious
1