You get all kinds of weird and amusing religious literature on the New York subways, and here’s the latest proof: 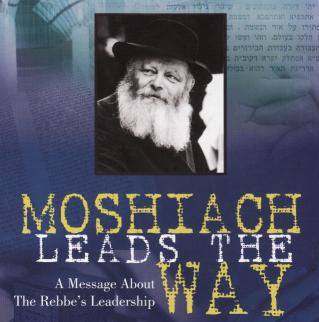 Click to enlarge. Also see interior and back cover.

If you’ve attended a college with a significant Jewish population, you’re probably familiar with Chabad House, an organization that runs community centers and programs for observant Jews. What you may not know is who runs these centers – or one of this group’s stranger and more curious offshoots, the subject of today’s post.

The Chabad Lubavitch movement was founded in the 18th century by Shneur Zalman, an Orthodox Jewish rabbi, in Russia. Zalman was an adherent of Hasidism, the offshoot of Judaism that emphasizes ecstatic and mystical worship (i.e., Kabbalah), and is known for its followers’ distinctive dress and use of the Yiddish language. Hasidic Jews are organized into dynastic communities each under the leadership of a single sage, a Rebbe, who’s believed to enjoy God’s special favor and, often, to possess miraculous powers and semi-divine insight into the workings of the world.

Including its founder, Shneur Zalman, the Chabad Lubavitch sect has had seven Rebbes. The seventh and most recent, Menachem Mendel Schneerson, took office in 1950. The Chabad Houses on college campuses and elsewhere were mainly his creation, the result of an outreach program intended to educate Americans about Hasidic Judaism and – more importantly – to urge all Jews to obey Orthodox religious law. (He also ran a secondary campaign to encourage non-Jews to obey the seven “Noahide Laws” for gentiles – probably the closest thing Judaism has ever had to explicit evangelism.)

Schneerson died in 1994 without naming a successor, and the Chabad movement has been without a Rebbe ever since. As you might have expected, this has led to fragmentation and power struggles, though the movement as a whole appears to be thriving – it has over 200,000 adherents, making it one of the single largest Hasidic groups. But it may be that the lack of clear earthly leadership has inspired some of its followers to start thinking in new directions. As you can see from my subway pamphlet, there’s a small but vocal and growing faction of Lubavitchers who believe their last, deceased Rebbe was the Moshiach – i.e., the Messiah, the prophesied hero of the Bible who will unite and rule over the Jews and usher in God’s kingdom on Earth.

As this article explains, when Schneerson was alive, Lubavitcher belief in his messianic status was fairly strong. Schneerson never explicitly proclaimed himself the messiah, but he never denied it either; he repeatedly made wink-and-nudge references to the imminence of the messianic age and did little to quell the growing messianic enthusiasm of his followers. In one video from later in his life, he accepts a petition signed by thousands of Lubavitchers declaring him the messiah; in another, he smiles as a group of his followers sing a song called the Yechi – the Yiddish lyrics of which translate to, “May our master, teacher and rabbi, the king messiah, live forever.”

Being deceased would seem to be an obvious disqualifier for messianic status – and indeed, there are non-messianic Lubavitchers who consider their messianic brethren an embarrassment and try to squelch them. Yet Schneerson’s devotees, commonly referred to as “mesichists“, don’t see this as an obstacle. Exactly how they deal with the fact of his death varies: some insist that he’s not actually dead but is merely hidden, biding his time to return. Others claim that his messiahship persists in some spiritual realm beyond the physical world. Still others believe that he’ll be resurrected when the time is right. All, however, share the belief that the Rebbe will return and the messianic age will arrive when a sufficient fraction of the world’s population learns about him and is convinced of his messiahhood – hence, my pamphlet from the subway.

I looked on Chabad World, the website set up by Schneerson’s followers, for an explanation of how they reconcile the fact of his death with their belief in him as Moshiach. I didn’t find one – it’s a subject the website tends to skate around, for example by repeatedly referring to Schneerson in the present tense (“the Rebbe teaches…”), such that someone who didn’t already know he was dead probably wouldn’t realize it. However, I did find lots of entertaining supplementary material, such as these miracle claims attributed to Schneerson, or this highly amusing page which argues not just for creationism, but apparently for geocentrism. Also not to be missed from that page is the comical explanation of how the Rebbe knew there is no intelligent life in the universe other than humans, which I can’t possibly do justice to by trying to summarize it here.

Aside from the clear documentation of Schneerson’s life, it’s hard not to notice the similarities between Chabad-Lubavitch messianism and early Christianity. As time passes and the Rebbe fails to return, it’s inevitable that historical memory of him will grow vaguer, the stories of his life and miracles will become further exaggerated, and his absence will almost certainly be worked into apologetic arguments which claim it was the plan all along for him to bide his time. Like Christianity, this new faith may flourish and grow; or like the teachings of Sabbatai Zevi, another would-be Jewish messiah, it may lose its ardor and fade away. There seems to be a perennial tendency in Judaism to latch onto some earthly figure as the messiah, which may be because the lack of a clearly defined afterlife has led them to continually look for this-worldly deliverance.

January 31, 2010
From the Mailbag: Atheists in the Closet
Next Post

February 2, 2010 In Which I Am Not Filled With Optimism
Recent Comments
0 | Leave a Comment
"I dunno. It seems any group of people living in a region for generations isn't ..."
al kimeea It’s Not Anti-Semitic to Criticize Israel
"According to Wiki, that was public policy, but there was quite a lot of cuddling ..."
al kimeea It’s Not Anti-Semitic to Criticize Israel
"That would be an ethical quandary for the PR, though. If they recruited ordinary civilians ..."
Adam Lee Commonwealth, III.I: The Owl
"So alongside the virus, have you also given any thought to the idea of the ..."
Ian Kacprzak Commonwealth, III.I: The Owl
Browse Our Archives
get the latest from
Daylight Atheism
Sign up for our newsletter
POPULAR AT PATHEOS Nonreligious
1