There’s welcome news out of the U.K. this week: the government-established Charity Commission has ruled that the adoption agency Catholic Care must abide by anti-discrimination laws and therefore may not refuse to consider same-sex couples as prospective parents: 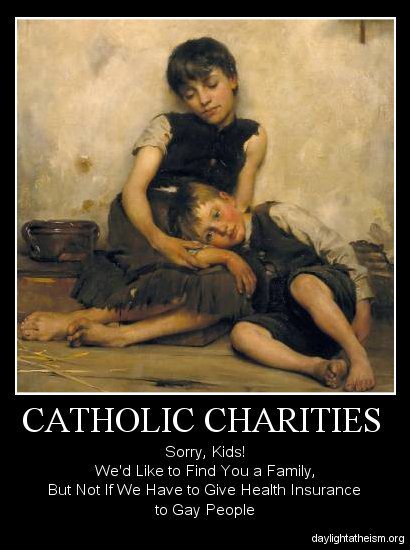 The Charity Commission… ruled that discrimination on the grounds of sexual orientation is a “serious matter” because it “departs from the principle of treating people equally”, and that religious views cannot justify such bias because adoption is a public matter.

Predictably, Catholic Care is now planning to shut down, since as is abundantly clear by now, this church would rather see children go homeless than deliver them into the care of stable, loving families whose lifestyle the Catholic church disapproves of. Eleven other Catholic adoption agencies in England have all closed down already for the same reason, and this is the last one still in operation. If it closes its doors, that will be the end of Catholic-run adoption services in the country – and I say, good riddance.

The closure of Catholic adoption agencies can be likened to the disappearance of an industry because technology has provided a new way to do the same work more cheaply or efficiently. Yes, in the short run, this causes pain and dislocation for people who used to perform a job that’s no longer required and are now out of work. But in the long run, it’s better for our economy that obsolete industries vanish, because that portion of society’s resources can be redirected into more valuable and productive endeavors.

Just so is the disappearance of prejudiced religious charities. In the short run, it may cause pain and hardship for the people those charities were willing to serve. But in the long run, it’s better for society that they vanish, because that slack will inevitably be taken up by new groups that cater to everyone, without fear or favor, and don’t arbitrarily exclude or refuse to help people who don’t fit a narrow set of prejudices. (See this post for an example of how this has worked in Washington, D.C.)

This story is a classic example of why I asked how much good religious charities really do. Catholic Care’s refusal to abide by pro-equality laws shows that their main priority isn’t helping people in need, but enforcing religious discrimination, partitioning the world into sets of people whom they judge as worthy or unworthy of their aid. A group like this doesn’t deserve the support of the public or the state, just as we wouldn’t tolerate a charity that refused to serve black people. It’s better that they disappear so that they can be replaced by an organization whose only goal is to do good, rather than one that sees doing good as a side effect of promoting their archaic and narrow-minded worldview.

August 23, 2010
The Language of God: A Doubtful Belief
Next Post